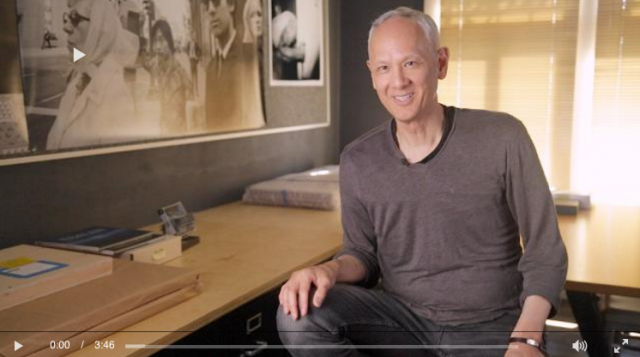 CalArts alumnus Michael Jang (Art BFA 73) has joined a prestigious group of artists including painters Brice Marden, and Ellsworth Kelly, sculptor Richard Serra, and photographers Stephen Shore, Richard Misrach and Hilla and Bernd Becher, among  others: They’re all represented in an online “gallery” of video interviews posted on the San Francisco Museum of Modern Art’s website.

The focus of the Bay Area-based photographer’s clip is a body of work Jang created for a student project at CalArts in 1973. His interest piqued by a listing of upcoming events posted in the lobby of the Beverly Hilton Hotel, Jang cleverly created faked press credentials that worked like a charm in providing him access to a number of exclusive events, including one at which he was the only photographer in the room. Jang’s paparazzi-style black-and-white images of show business luminaries include those of Jack Lemmon, David Bowie, Jack Benny, Richard Pryor, and—in a single picture—Frank Sinatra, Ronald Reagan and Milton Berle. Just as entertaining as the vintage photographs featured in the video, is Jang’s on-camera and voiceover narration.

The video is a perfect complement to Jang’s Instagram feed, which is rich in pop culture history and “Offers a Window Into CalArts in the ’70s.“