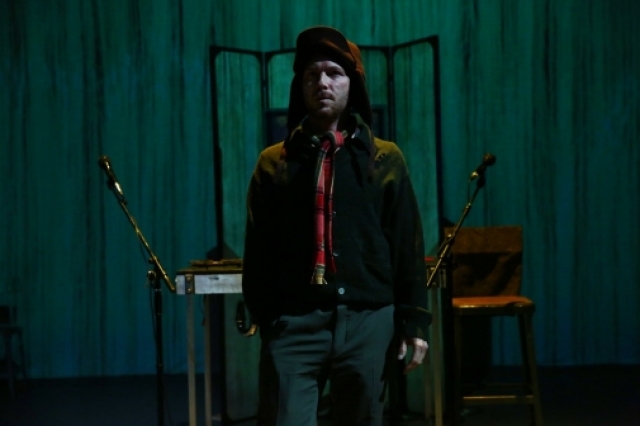 The Wooster Group, the iconic New York-based experimental theater company, is returning to its Los Angeles home at the Roy and Edna Disney/CalArts Theater (REDCAT) to give the world premiere of its newest production, The Room, the 1957 “comedy of menace” by legendary English playwright and screenwriter Harold Pinter (1930–2008).

The production, directed by Elizabeth LeCompte, opens tonight and continues through Sunday, Feb. 14.

As the first play by Pinter, written when he was 27, The Room marked the arrival of a distinctive voice that has transfixed audiences, critics and fellow artists for successive generations. Known for bristling, often confrontational dialogue, a musicality punctuated by telling pauses and silences, and carefully laid omissions in the stories, he went on to create a body of work that includes the plays The Birthday Party (1957), The Caretaker (1960), The Homecoming (1964) and No Man’s Land (1975), as well as numerous adapted screenplays. Pinter garnered more than 50 major international awards, including the Nobel Prize in Literature in 2005.

The Woosters’ staging of The Room features Kate Valk and Scott Renderer as Rose and Bert Hudd, a couple whose cloistered domesticity is threatened by a succession of outsiders: Ari Fliakos and Suzzy Roche as Mr. and Mrs. Sands, Fliakos again as Mr. Kidd, and Philip Moore as the mysterious Riley.

LeCompte and company approach the Pinter text through comedic forms that range from vaudeville and American television comedy duos (Abbott and Costello, the Smothers Brothers) to a traditional Chinese style known as xiansheng or “crosstalk.” The group’s production notes point out that “unlike American TV comedy duos, ‘cross talk’ develops its comedy over time through an extended narrative, allowing more nuance in its storytelling style. We are always trying to find new ways to tell stories, and putting ‘crosstalk’ into conversation with Pinter’s text takes us in new directions.”

Ed note—Because of an alleged rights issue between The Pinter Estate and the Wooster Group, the company has not been given permission for the future productions of The Room being planned for New York and Paris, so the REDCAT shows may be the Wooster Group’s only staging of the play.

The Wooster Group: 'The Room' by Harold Pinter