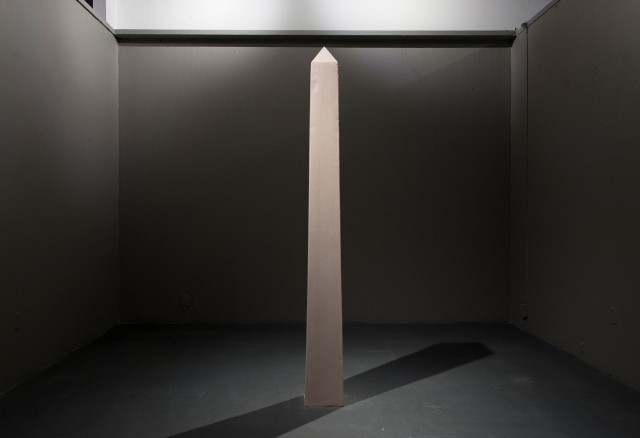 Mariner Padwa’s (Art MFA 17) solo art exhibition, Little Caesars, which was on view in the Lime Gallery at CalArts from Jan. 23-30, featured a constructed obelisk titled, “American Obelisk (For the Streets of Rome).” In creating “American Obelisk,” Padwa translated Ancient Egyptian hieroglyphs into English, which he then inscribed. Upon closer inspection of the obelisk, viewers discovered the inscriptions wrapped around all four sides of the obelisk and participated in a slow reading of the text. We interviewed the artist about his process.

24700: Could you talk about the process in developing your exhibition?

Mariner Padwa: I had some ideas for obelisk inscriptions a few years ago, but I only focused on researching obelisk texts more intensely as a project for Sam Durant’s seminar on Art and Politics this past fall. I had seen his Proposal for White and Indian Dead Monument Transpositions at the Los Angeles County Museum of Art (LACMA) in 2014, and I was interested in his experience researching and replicating obelisks. We also worked together in an independent studies course, and thinking about the spatial context of obelisks was partly what made me want to replicate this particular obelisk, and to propose its installation in Old Rome.

24700: What materials did you use to construct this Obelisk and why did you choose those specific materials?

MP: It’s concrete. The obelisk I was replicating is a solid block of pink Aswan granite, which I imagine the Roman emperors chose for its durability, and to reproduce the aura of the Pharaohs’ material choice. Obviously concrete is not that durable—but it is basically stone. Jimmie Durham has some great funny writing about the politics of materials, and especially stone. I like that concrete is ubiquitous, and invaluable. I usually just make gray concrete, but for this I used white cement and tinted it a kind of tan pink.

24700: What made you decide to create a replica of The Obelisco Americano in Piazza Navona, Rome? And what happens when you replicate a monument and manipulate its original text?

MP: I said in the announcement that the exhibition was based on an original poem by Belgium’s Broodthaers—which it’s actually not—but I was inspired by his brilliant use of the language of authority to subvert that same authority. Rome is this pivotal site in the projection of patriarchal power towards posterity, and a Roman obelisk is a really straightforward embodiment of that, so it was a good subject for subversion.

As for the text, I would say that I tried to channel or focus the original text, rather than manipulate it. I wanted to preserve the gravity that the language conveys, but with satirical results. That’s why it was important for me to display the language sources I worked with as part of the exhibit as well. 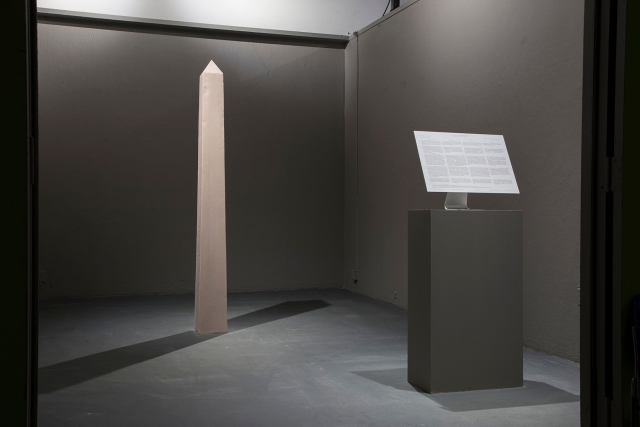 MP: It’s actually an important question! Because it’s an invention, and it’s funny that posterity will Google this name and find results about chicken Caesar. It’s like the Eddie Izzard routine: “People of Rome, remember me… as a salad!”

24700: How does language play a role in your exhibition? What happens when you uncover a history previously unavailable to us by reproducing hieroglyphic text into English?

MP: Obelisks say right on them what they do, or what they are for. They function as sites for language. But their texts obviously don’t disclose meaning without close reading. People probably take millions of pictures of this obelisk in the Piazza Navona every year. And what does all that stuff on it mean? It’s a strange kind of significance. In my duplication, I’m not interested in something like a refusal to deliver a clear message—but I do want to invite at least a small decipherment, a small contribution of energy. I hope that slow reading can engage a viewer to contribute more meaning to the work.

24700: How does history influence your practice?

MP: In Travis Diehl’s seminar last semester we read Bruce Hainley’s Under the Sign of [Sic]. There was something I loved in thinking about time—something like, Sturtevant as time bomb. It’s like, “planning for the moment to come.” And then I think one way history influences my work differently from other archaeological practices in contemporary art is that I’m not performing archaeology—I’m just replicating it.