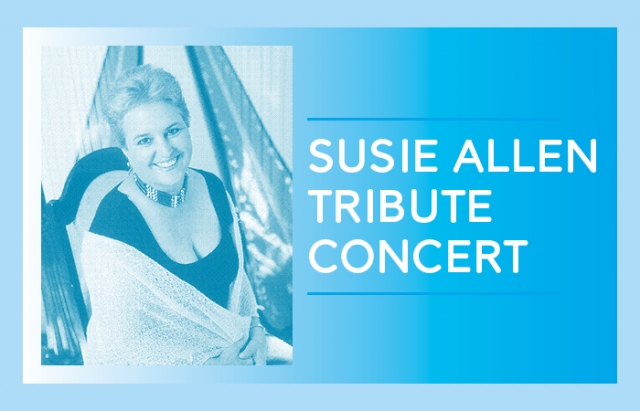 On Saturday (Feb. 20), the CalArts community pays tribute to the late harpist and CalArts alumna and faculty Susan Allen (Music BFA 73) with a concert at Roy O. Disney Hall.

The evening features performances by current CalArts harp students and acclaimed alumni, current and former faculty and a youth group from CalArts’ Community Arts Partnership (CAP) for which Allen served as a teacher and mentor. Among the performers are alumni harpists Mia Theodoratus (Music MFA 94) and Carolyn Sykes (Music MFA 98), former faculty and mezzo-soprano Kimball Wheeler (Music MFA 75) and pianist and former faculty Bryan Pezzone. In honor of Allen’s distinguished international career as a master improviser, faculty member Vinny Golia will direct a series of improvisations, including one for multiple harps. The concert will include works by John Cage, former CalArts faculty John Bergamo, alumnus William Hawley (Music BFA 74) and founding Dean of the CalArts School of Music Mel Powell.

Allen was a long-time champion of new and contemporary music and improvisation and was commissioned for more than 200 works during her career. Her most recent album, released last year, is titled Postcard from Heaven and features new experimental works that focus on the harp.

“She was a consummate musician, a supremely accomplished harpist, and a musical scholar. Susie will remain a CalArts legend,” says Dean of the Herb Alpert School of Music at CalArts David Rosenboom in a press release.

In conjunction with the concert, the community establishes the Susie Allen Scholarship at CalArts, aiming to provide annual tuition support for deserving students in the Herb Alpert School of Music at CalArts. Donations may be made through this link.