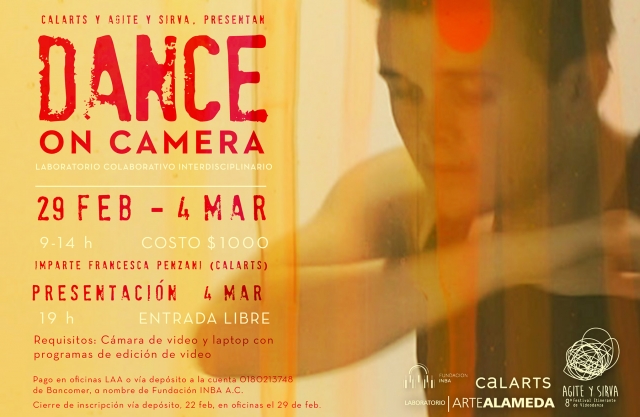 Francesca Penzani (Dance/IM MFA 99), a faculty member of The Sharon Disney Lund School of Dance at CalArts, begins a residency in Mexico later this month. Penzani, currently on sabbatical from CalArts, will teach Dance on Camera, a workshop sponsored by Laboratorio Arte Alameda and Agite Y Sirva, hosted at Bellas Artes.

The workshop is designed to encourage students to explore different approaches to dance for the camera through improvisation and collaboration. Penzani will also show participants in the workshop dance films created by her students, films she has collected since beginning her time as CalArts faculty in 1999.

A native of Italy, Penzani began her studies in theater at Teatro Viaggio and Comuna Baires in Italy. Later, she moved to London where she graduated from London Contemporary Dance School in 1991. The following year, the Arts Council of England and BBC2 awarded her a training-ship for “Dance for the Camera” where she worked with directors Ross MacGibbon and Terry Braun.

On her website, Penzani talks about what draws her to combining dance and film: “My interest in working with dance in the context of the film/video medium is in revealing the hidden, the lost, the unnoticed and providing the platform for its performance, punctuating its significance, honoring its moment.”

Penzani’s video installation “Colours” was featured at the CalArts feminist art exhibition Exquisite Acts of Everyday Rebellions and was part of the exhibition WHACK! Art and the Feminist Revolution at the Geffen Contemporary at MOCA in Los Angeles. A photo from “Colours” was used in the posters to publicize Penzani’s residency with Laboratorio Arte Alameda with Agite Y Sirva.

Later this spring, Penzani will screen another selection of student and faculty videos as well as her own as well as videos of her own work in Havana, Cuba, at DVDanza Habana during the annual dance festival April 6-10, 2016.

Above: Penzani’s ‘Women Hold Up Half the Sky.’