We’ve updated the site! Please visit us at 24700.calarts.edu
Regimen_vincelli-13

Amanda Vincelli’s (Art MFA 17) solo exhibit Regimen, which was on view in the Lime Gallery from Jan. 19-22, explored the medicinal rituals of more than 100 women through the mode of photography. We interviewed the artist about her process in documenting and speaking with the participants for this exhibition.

24700: For this exhibition, you displayed photographs of women along with the medications they consume. Can you talk about the process of creating this body of work? How many women were photographed?

Amanda Vincelli: I began the project in November 2014 and, over the course of one year, took the portraits of 100 women I met, ages 21 to 35, across five different cities I lived in or visited—New York, Amsterdam, London, Montreal and Los Angeles. For me, a good portrait reveals something intangible about its subject. The portraits, detached from the medicines each individual takes, play with our assumptions about that relationship. The conversations during the first portrait sessions helped me establish a more precise form for the project, which became my own regimen that year. Systematically, I collected and photographed the medicines my subjects regularly consumed—pharmaceuticals, supplements, vitamins, recreational drugs—if they took any. I asked them to write about their motivations for their habits, and later, some shared their own audio recordings of these testimonies. The exhibition displayed the portraits, the collected medicines (pills, powders and liquids), as well as the handwritten testimonies and overlapping audio recordings, which were triggered by motion sensors. The project and the exhibition space was designed to place the people at the center of the project, not the medicines.

24700: What influenced you to create this series centered on medication, both conventional and nonconventional?

AV: Raised by my mother, who was a nurse and later became a nurse practitioner, medicines were omnipresent in my life growing up. As a young adult, I became quite reflective about my relationship with medicines, perhaps stemming from a tendency to be skeptical towards the authority of her practice. Scrutinizing my own ever evolving medicinal habits, and noticing similar patterns among my peers, triggered this investigation. I was astonished how little I knew about the medicines I had consumed and how much the readily available information deepened my confusion and skepticism. Talking about it with other people, I realized that these blind spots were not uncommon. Further, I noticed how widely consumed and trendy non-vital medicines were. For the first time, I perceived them as complex consumer items, ostensible short cuts to health and normality.

I was also interested in the ritualistic aspects of medicinal intake, the private and, for some, the sacred nature of it—this connection between the object, the act, the cultural and the spiritual. I tried to highlight this seductive appeal of medicines in the exhibit, by displaying them like jewels. On the other hand, I had the photographs of the medicines retouched in India, a practice common to e-commerce and other forms of commercial photography. This streamlined my artistic production, while mimicking globalized pharmaceutical and supplement manufacturing. Medicines, as captured in the photographs, are at once uncanny and appealing, just as they have the ability to help and harm.

24700: Why did you choose to specifically photograph women between 21-35 years of age? Will you consider photographing their male counterparts in the future? Why or why not?

AV: People of different ages and genders have different relationships to medicines, so I focused on the intricacies of one group. I chose the one I was most familiar with. I found their relationship with medicines particularly interesting because it’s wrapped up in questions of reproductive health and body issues, questions that other demographics may not have to deal with quite as much. When I began the project, I aspired to document a different pool of people every year. But, I have since realized that doing that wouldn’t add much force to the project: the central question already raised by Regimen, ‘why do I take what I take?’, is universally applicable.

24700: What was the most challenging aspect in working on this project?

AV: Creating imagery, a space, and a discourse that was fair and honorable to all of the participants. That meant discovering what my preconceptions were, not letting them get in the way, and reconsidering them throughout. The aspect I expected to be the most challenging, getting people to participate and be transparent, actually came very naturally. 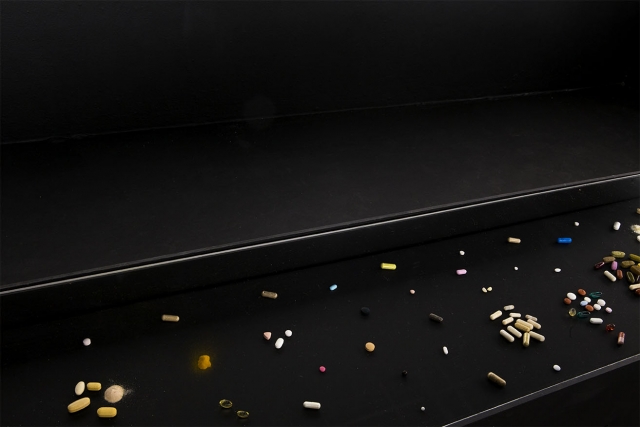 AV: Medicines were the starting point for conversation about many other aspects of life–childhood, relationships, aspirations, work performance, insecurities, reproduction, love… The most interesting patterns were not necessarily gender-specific, but perhaps more generational and cultural. For example, I noticed a general distrust of conventional medical practices and a turn to Eastern, alternative medicine, more spiritual forms of healing, and lots of self-diagnosis. It seemed as if people were approaching health care like online research — synthesizing diverse, sometimes contradictory, sources into a health care philosophy. Often, this amounted to confusion, a volatile medicinal regimen, and a return to familiar remedies — ones known from childhood, received from relatives or peers, or viewed as common knowledge . I also find it worth noting that a lot of women used the word “crazy” to describe their feelings. I’m not so sure that would have been the case with other groups.

24700: Your exhibition extends beyond the gallery space and maintains an online presence through the website you’ve created, www.regimen.online. Could you talk a little bit about the website and, perhaps, the archival function it takes on?

AV: In the exhibit, I was most concerned with creating a space that was as emotionally charged as the portrait sessions and testimonies. In contrast, the online archive is more clinical (which is generally how I feel about online experiences). It also showcases the still-life photographs of the medicines, which were not part of the exhibit. Online, the photographs of the medicines are organized by person (without revealing whom they belong to); in the gallery, the actual medicines were organized by type, without labels. In addition, the website indexes all the medicines consumed and links each to the testimonials that referenced it—to compare people’s motivations for taking them. This was another way of raising the project’s inherent bio-political issues. Finally, it was important for me to provide a platform where visitors could spend more time engaging with the content intimately at different times and for more people, not necessarily of the art world, to access it. 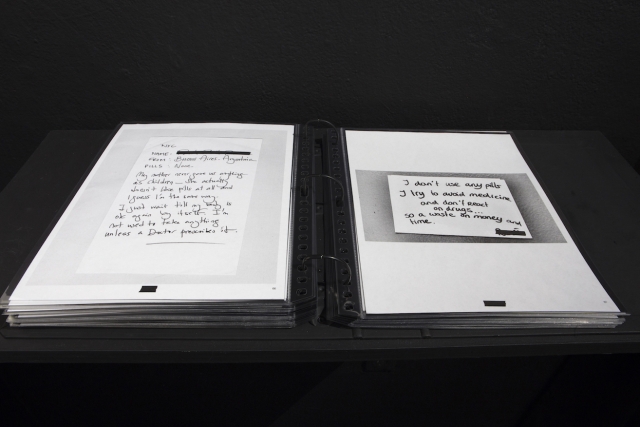