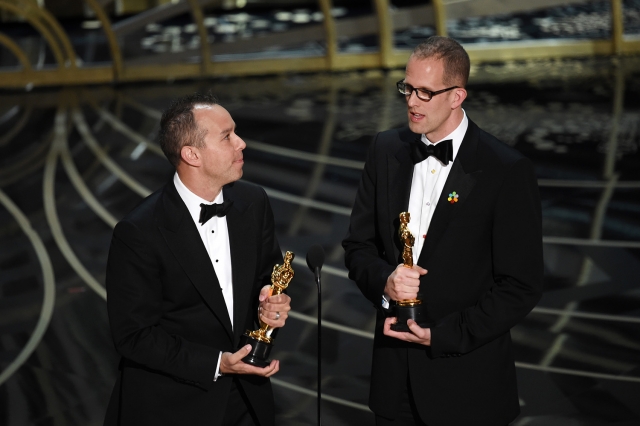 Producer Jonas Rivera (L) and director Pete Docter accept the Best Animated Feature Film award for ‘Inside Out’ onstage during the 88th Annual Academy Awards at the Dolby Theatre on February 28, 2016 in Hollywood, California. | Photo by Kevin Winter/Getty Images

On Sunday (Feb. 28), the 88th Academy Awards were held in Hollywood, honoring the best films of the year. Inside Out, directed by CalArts alumnus Pete Docter (Film/Video BFA 90) and Ronnie del Carmen, won the Oscar for Best Animated Feature, beating out Anomalisa, Boy and the World, Shaun the Sheep Movie and When Marnie Was There.

In his onstage acceptance speech, Docter said, “This film was really born from watching our kids grow up, which is not easy. Anyone out there who’s in junior high, high school, working it out, suffering. There are days you’re gonna feel sad, you’re gonna feel angry, you’re gonna be scared. That’s nothing you can choose, but you can make stuff. Make films. Draw. Write. It’ll make a world of difference.”

He also used the Academy’s newly implemented thank-you crawl (for the winners to thank everyone they would like) to tell his kids they were getting a dog.

Among other winners, Spotlight was named Best Picture, while Mad Max: Fury Road won the most awards of the night, garnering six Oscars. After four previous nominations, Leonardo DiCaprio won Best Actor for his role as frontiersman Hugh Glass in The Revenant.