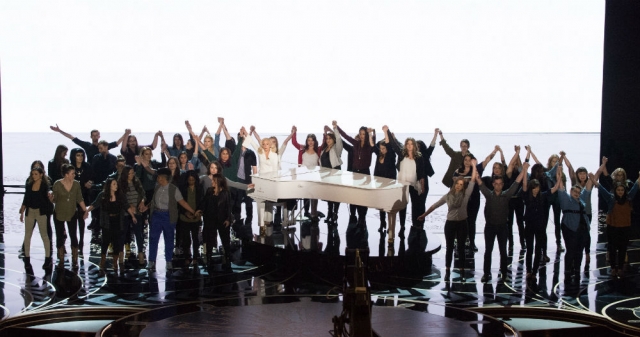 Lady Gaga performs ‘Til It Happens to You’ from Kirby Dick’s ‘The Hunting Ground’ at the Oscars. (Photo: Mark Suban / ©A.M.P.A.S.)

At Sunday’s Oscars ceremony, Lady Gaga performed a show-stopping rendition of the nominated song, “Til It Happens To You,” written by Gaga and Diane Warren for CalArts alumnus Kirby Dick’s (Art BFA 76) film, The Hunting Ground.

The powerful documentary explores sexual assault on college campuses in the United States through interviewers with survivors, prosecutors, school administrators and even an anonymous predator. The main narrative follows survivors Andrea Pino and Annie Clark, “mavericks” who are employing Title IX legal strategy to take on the institutions that have systematically deterred victims from speaking up.

Dick’s previous feature, The Invisible War, investigated rape culture within the U.S. military. The work earned him 2014 Emmy Awards for Best Documentary and Outstanding Investigative Journalism, Long Form; a 2013 Peabody Award; and the 2012 Sundance Film Festival Audience Award. It was also nominated for a 2012 Academy Award for Best Documentary Feature.

Although Gaga and Warren didn’t earn the Oscar for Best Original Song (“Writing’s On The Wall” from Spectre took home the award), the performance won the night—earning one of the evening’s standing ovations. Toward the end of the powerful performance, dozens of assault survivors flanked Gaga with messages like “not your fault” written out on their arms.

The Hunting Ground is available now on demand and on iTunes. It’s coming to Netflix on March 14.

Above: Trailer for ‘The Hunting Ground.’