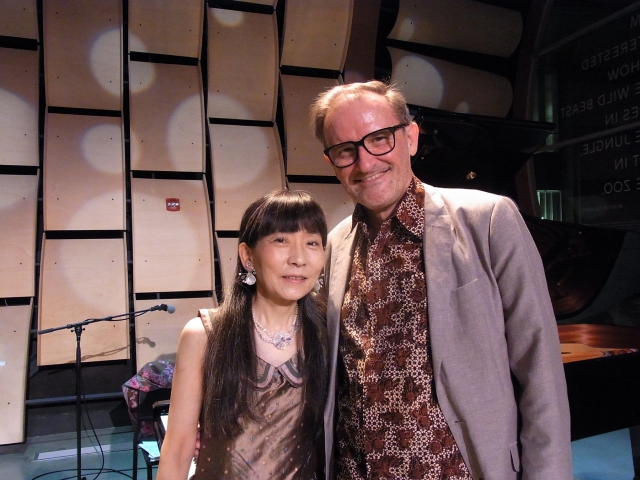 Solo piano works by David Rosenboom, dean of The Herb Alpert School of Music at CalArts, are the subject of the renowned annual recital by piano virtuosa Satoko Inoue being presented this Sunday (March 6) at Tokyo Opera City, one of the Japanese capital’s most storied performance venues. This year’s recital is Inoue’s 25th.

In addition to the survey performed by Inoue, Rosenboom will give the premiere of a new work for creative pianist titled Unverifiable Intuitions, commissioned for the occasion, and join Inoue in a duet version of an early piece, Continental Divide (1964).

Inoue is widely acclaimed in Japan, Europe and the United States as a foremost interpreter of contemporary solo piano music. Formerly a member of the Musica Practica Ensemble, she has premiered work by some of Japan’s leading composers, including Jo Kondo, Yori-aki Matsudaira, Satoshi Tanaka and Yuji Itoh; she is also known for interpreting the music of Toru Takemitsu, John Cage, Morton Feldman and Luc Ferrari, among many others. Inoue teaches at Tokyo’s Kunitachi College of Music, which has an annual student exchange program with The Herb Alpert School of Music. The pianist most recently visited CalArts in October 2014, when she showcased the music of contemporary Japanese composers in a solo concert at The Wild Beast.

At the reception following the concert, Rosenboom is meeting with Tokyo-based CalArts alumni as well as prospective applicants to The Herb Alpert School of Music.