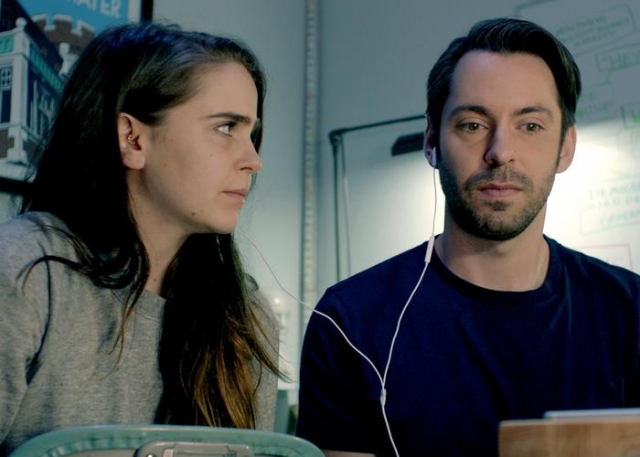 Starring Martin Starr (This is the End, Freaks and Geeks) and Mae Whitman (Arrested Development, Parenthood), Operator screens as part of the Visions section, dedicated to “risk-taking artists in the new cinema landscape who demonstrate raw innovation and creativity in documentary and narrative filmmaking.”

In the dark comedy, Starr plays Joe, a data-obsessed programmer who tracks and charts all aspects of his life to tamp down his anxiety; his wife Emily (Whitman) is an up-and-coming comedian. Their happy existence is thrown into turmoil when Joe’s latest work project—he designs automated customer services voices for clients—is a failure. He then asks Emily to serve as the voice template for the project, but things go awry when Joe begins to obsess on ways to replicate and program Emily’s empathy in his robo-voices.

Kibens’ debut is highly anticipated, as the Operator script, co-written by Kibens and her wife Sharon Greene, was selected in 2012 as one of 12 projects for the prestigious Sundance Screenwriters Lab. In 2014, the project was one of 10 selected for Film Independent’s Fast Track program, a three-day film financing market, held annually during the Los Angeles Film Festival. She also received Film Independent’s Alfred P. Sloan Foundation production grant of $15,000, which is given to a Fast Track participant.

For her lauded CalArts’ thesis film, “Recessive,” Kibens was awarded a 2011 HBO/DGA Directing Fellowship and was selected as one of Film Independent’s 2011 Project:Involve fellows. “Recessive” focuses on a lesbian who has a marker for a serious genetic disorder and must decide whether to have a child with her wife. Watch an excerpt from “Recessive.”

Prior to the film’s debut on Saturday, Kibens also participates in the panel discussion, Through Our Eyes: Female Filmmakers Tell All, alongside Janicza Bravo (Woman in Deep), Judi Krant (Made in China), Kat Candler (Hellion) and Leah Meyerhoff (I Believe in Unicorns).