By Molly Surazhsky, a BFA student in CalArts’ Program in Art.

Dana Ljubicic’s (Art BFA 16) solo exhibition, Idle Time, which was on view in the Lime Gallery from Feb. 14-20, invited audiences to take a break and slow down within the gallery space through an exploration of drawn doodles projected onto the walls. We interviewed the artist about her process and the art of doodling.

24700: The title of your show is Idle Time and inside the gallery you featured two couches and projected images onto the walls, which played on loop. Will you talk a little bit about those images?
Dana Ljubicic: Since fifth grade, I’ve just had an urge to collect doodles and so at the end of each school year, I would go through all of my notebooks and rip out the doodles. Now that I’ve come to the end of all my schooling, and I have this huge collection of doodles, I was thinking about what to do with all of them. The first thing I did was paste them into a binder where I made sure not to arrange them by any specific chronological order, and then I projected around 300 different doodles onto the walls, which played on a loop. Since this is an ongoing project, there are many more images that I plan to scan in.

24700: In a way, these doodles could be read as a critique of institutional spaces.
DL: When I first started collecting them, I wasn’t really sure why [I did] besides the fact that I had an urge to do so. When I look back and think about the doodles, I know that doodling was my way of getting away from the world of school, especially in the fifth grade when I was first confronted with the dreariness of the institute setting. Doodling was my way of coping with disliking school, getting through it, assimilating to it, but also a method of quiet resistance, and I think that’s why I kept them because that was my only way out at that time.

24700: Through this conversation, one of the things that comes to my mind is the mayor of Tirana, Albania. His name is Edi Rama and he‘s also an artist. One of the things he discusses, as an artist, in his governmental role, is the fact that he doodles during his meetings with government officials. He explains that this enables him to be more productive. Would you say that you‘ve had a similar experience?
DL: I definitely had a similar experience, and part of doodling was a way of challenging the authority of my teachers, but also as a method of coping with the situation. We all have our ways of coping with whichever situations we’re confronted with. I did have some teachers in high school, who would explain, “Dana doodles; that’s what she does.” So doodling did not just make me “productive,” but allowed a type of productivity that was different than what was expected of me. It allowed me to focus on schoolwork that I really didn’t want to do, but also it let me have my mind wander to some space of what I define as “idle time.” It helped me thrive in school as my immigrant parents so very much expected of me, but to also create some type of side focus. It allowed me to keep and develop those values of idle time within such a strict and high-expectation environment. 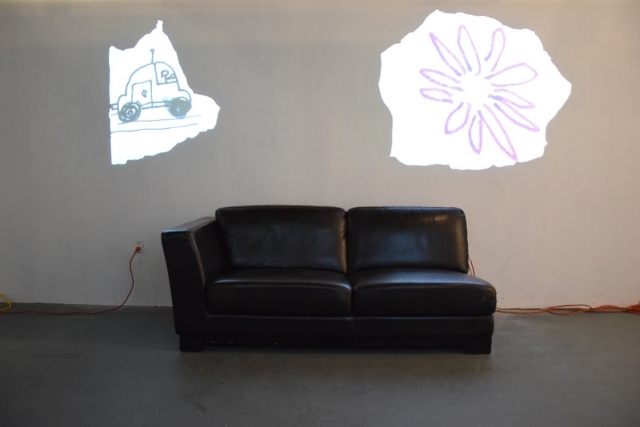 24700: Do you see this project extending beyond the school setting?
DL: I’m not sure. Right now the way I’m thinking about it is that I’m ending school and my doodling is going to end. Regardless of this, the idea of doodling could extend, and might very well extend beyond the institutional setting, but for now I am focused on the classroom setting with this particular exhibition.

24700: Another aspect of your exhibition is a piece, which is hung in the center of the room made on foam core with embroidery thread. What‘s the title of this piece?
DL: The title is, “Eight Days of Recording How Often I Spend Time With People,” and it functions like a chart with a key at the bottom, where half a centimeter is equal to one minute. Alongside that, there’s the amount of time I’ve spent with different people, which is signified through different colors using embroidery thread. And then there’s the time I’ve spent with no interaction, which is just shown through gray thread, and the time spent class, which is shown with black thread. That piece is basically mapping out all of my time, and I placed it in the center of the gallery in order to start contextualizing all of my work and to create a process of thinking about your time and my time.

24700: Another aspect of your exhibition is the “Idle Time Manifesto,“ which you gave out during your exhibition opening.
DL: It’s actually a “manifesto worksheet,” which is intended to look like a school worksheet with doodles all over it, making it sort of illegible. The manifesto was produced using a real school worksheet template and features questions about the manifesto, as if you were going to be taught this manifesto in school. All together there are 10 statements that encapsulate Idle Time; here are some of them:

Art is not what happens as a result of focused, purpose-driven, goal-oriented productivity.
Idle Time is a resistance to authority and the oppression of the art market and institute world.
Idle Time is all of the process and people forgotten in historicization.
Historicizing and valuing Idle Time will create a change in the oppression.

24700: What do you mean when you use the term historicization?
DL: I’m thinking about what gets left out of the history of art, and I think that’s a huge question that I’ve always pondered in my schooling as it really shapes the way that we learn. So by “historicizing” I mean who gets taught and what gets taught and how is it taught, learned or consumed, which is why I presented the manifesto as a worksheet with doodles over it, rather than just a typed up document.