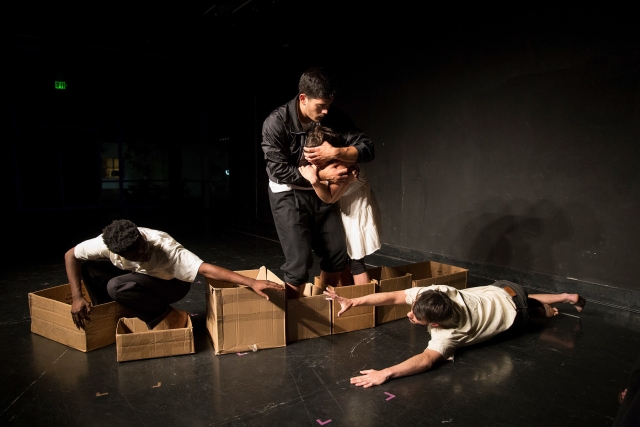 From the CNP workshop production of ‘Shelter’ at CalArts. | Photo: Rafael Hernandez.

**Weather update 4/8/16: Shelter is an outdoor performance with bleacher seating. Please dress warmly for the cool evening and be prepared to walk through damp grass and climb bleacher seating. We recommend comfortable walking shoes and long pants. The Shelter team hopes to share the outdoor performance with you, but in the event of rain, Shelter will be performed indoors at the adjacent Plaza de la Raza.**

From April 8 through 17, the CalArts Center for New Performance (CNP) and its Latino(a) theater initiative, Duende CalArts, present Shelter, a new play that tackles the current immigration crisis in the United States and Central America through the real-life stories of those most affected by it.

Shelter follows stories of unaccompanied minors who, after a perilous journey crossing the border, have to face an overburdened US Homeland Security, which oftentimes holds them in shared detention cells while they await court proceedings.

CalArts School of Theater faculty Marissa Chibas interviewed high school students and immigration rights volunteers all over Los Angeles before writing Shelter. Directed by celebrated Mexico City-based artist Martín Acosta with choreography by CalArts alumnus Fernando Belo (Theater MFA 13), the English and Spanish production is designed to be heavily movement-based theater, so that one can watch the production without knowing the language and still understand the plot.

In addition to the two language versions, the production team also mounts two versions of the play depending on its physical location. In a special indoor production on March 18 at the Los Angeles headquarters of CARECEN, the largest Central American immigration rights organization, Shelter is performed with seven chairs and seven actors. This “mobile theater” version makes it easy for Shelter to be performed in unconventional spaces such as community centers and conference rooms. 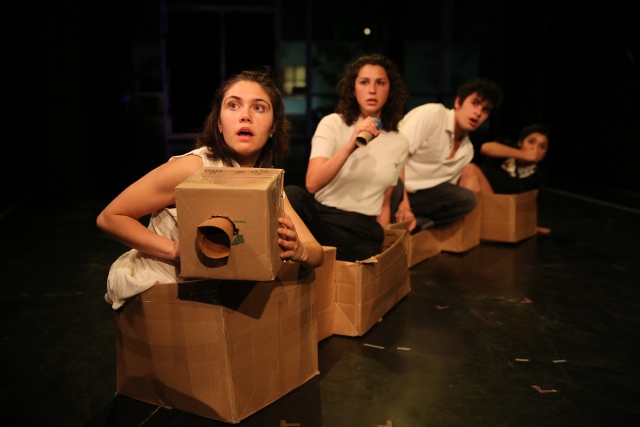 From the CNP workshop production of ‘Shelter’ at CalArts. | Photo: Rafael Hernandez

In the outdoor production version, which premieres on April 8 at Lincoln Park, the set includes a 20-foot shipping container, evoking La Bestia (“the beast”), the northbound freight trains that many migrants hop onto in a dangerous and illegal attempt to catch a ride to the border. Risks include the loss of limbs, dehydration, starvation, assault, robbery and death by falling or decapitation.

Throughout Shelter’s production run, CNP and Duende CalArts will hold workshops, talkback sessions and create learning curricula to deepen understanding of the issues the play addresses, as well as facilitate community engagement.

The issues brought up and addressed in Shelter are some of the most pressing matters facing communities and the nation (and the world)… The dialogue sessions provide space for the audience community to jointly engage around issues of human rights, policy, and politics. In addition to the direct audience dialogue, the facilitation structure includes opportunities to include local voices and experts.

The website Think Progress interviews actor Moriah Martel (Theater BFA 17), who says that “bringing these stories to the stage could have a powerful impact” and hopes that the production leads to a greater understanding of the crisis with “lasting awareness and empathy.”

A preview of Shelter runs on April 7 in Lincoln Park.