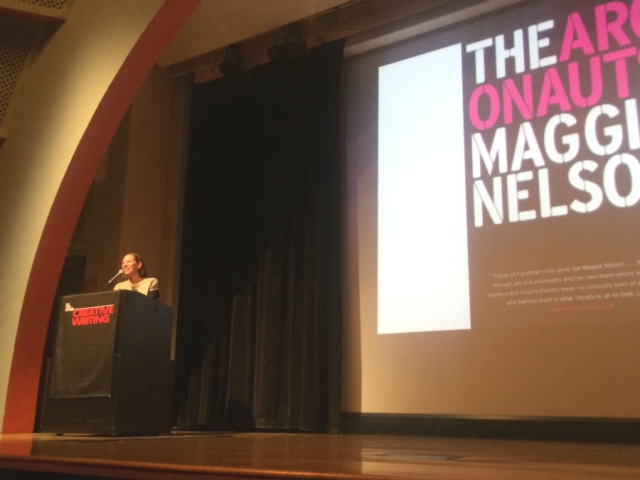 On Thursday night (March 17) at the New School in New York City, Maggie Nelson, author and chair of CalArts’ Creative Writing Program, won the National Book Critics Circle Award for Criticism. She was honored for her 2015 book, The Argonauts, which is part memoir and part examination of gender, sexual politics and art.

Nelson was in good company as the Criticism category finalists also included: Ta-Nehisi Coates’ Between the World and Me; Leo Damrosch’s Eternity’s Sunrise: The Imaginative World of William Blake, Colm Tóibín’s On Elizabeth Bishop and James Wood’s The Nearest Thing to Life.

“Maggie Nelson’s book could not have been written even twenty years ago,” said Karen Long, the nonfiction chair. “I so appreciated her allowing me into what otherwise I would never know about.” Whether there’s enough diversity in the publishing industry or the books it produces, the critic has her own job to do. “I think criticism and discernment is about which direction you gaze,” said Long. “And so, look in a new direction, have a new life. We all will be embarrassed in twenty years about what we’ve been blind about.”

The National Book Critics Circle (NBCC), comprised of more than 700 critics and editors from newspapers, online media and magazines, was established in 1974 to build up the national conversation around reading, criticism and literature. The annual awards honor the best literature published in the U.S. in six categories—autobiography, biography, criticism, fiction, nonfiction and poetry.