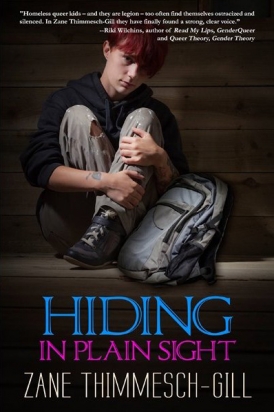 On March 8, the finalists for the 2016 Lambda Literary Awards were announced. Hiding in Plain Sight, the debut novel by artist, writer and scholar Zane Thimmesch-Gill (Film/Video-Creative Writing MFA 08) is among the finalists culled from the 933 submissions.

Hiding in Plain Sight is nominated in the Transgender Nonfiction category. The memoir describes in detail Thimmesch-Gill’s time as a homeless youth dealing with near-constant violence, and his struggle to get himself through college and pay for his transition from female to male.

He talks about the book in an interview with the University of Minnesota, where he is currently a PhD candidate in the Human Factors and Ergonomics program in the College of Design:

I initially started writing this book for homeless and at-risk queer and trans youth. Much like Dan Savage’s “It Gets Better” campaign, I want queer and trans youth to understand that they are not alone in dealing with these issues. I want them to understand that they are up against great odds, but it is worth fighting through all the pain and suffering, because they can and will find peace.

Other notable nominees this year are actor Carrie Brownstein’s Hunger Makes Me a Modern Girl and the previously unpublished Early Stories by the late Truman Capote. See the complete list of finalists.

The Lambda Literary Awards, affectionately known as the “Lammys,” are awarded yearly to published works which celebrate or explore LGBT themes. Winners of the awards will be announced in a ceremony in New York on June 6.