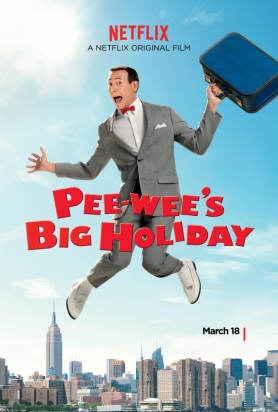 In Pee-wee’s Big Holiday, CalArts School of Theater alumnus Paul Reubens (Theater BFA 73) revives his iconic role as Pee-wee Herman for a new feature film. For Big Holiday, Reubens collaborates with Judd Apatow (Anchorman, Bridesmaids) to produce the film; Paul Rust (Comedy Bang! Bang!, Arrested Development) to write it; and John Lee (Broad City, Inside Amy Schumer) to make his feature-film directorial debut. The film had its world premiere at South by Southwest on March 17, and bypassed theaters for a Netflix-exclusive global release the next day.

“We didn’t hesitate for a moment, knowing that Pee-wee’s Big Holiday was such a passion project for Paul and Judd and we are delighted by the opportunity to introduce such a beloved character to a new generation,” said Netflix Chief Content Officer Ted Sarandos in the press release. “We are thrilled to bring our viewers around the world the wonder of Pee-wee Herman.”

Pee-wee’s Big Holiday follows Pee-wee Herman on his first adventure away from home. After meeting Hollywood star Joe Manganiello, played by himself, Pee-wee takes a leap of faith and sets off for the open road. The film is a series of encounters between Pee-wee and a number of characters, with a cast that includes Alia Shawka and Tara Buck. Familiar faces such as Lawrence Fishburne and David Arquette also make cameo appearances.

Reubens employs the elements that made his TV and film series successful: a bow-tie wearing, childlike character whose life exists somewhere between that of an innovative bachelor and a sophisticated orphan. Like Pee-wee’s Big Adventure and Pee-wee’s Playhouse, Pee-wee’s Big Holiday evokes a nostalgia for a timeless—and surreal—American middle-class experience.

Above: Trailer for ‘Pee-wee’s Big Holiday.’

The character of Pee-wee Herman was created while Reubens was a member of the Los Angeles improv group The Groundlings. The stage act gained popularity and landed him on HBO with The Pee-wee Herman Show. Reubens grew a national audience that would eventually make Pee-wee into a cult icon.

Rolling Stone says, “Whether you grew up with Herman or not, the character serves as a means to reconnect with the simple pleasures of childhood.” The Guardian echoes this, offering, “the film plays like nirvana for Pee-wee fans, who either grew up with or simply admired the beguiling creation, which held a unique hold on pop culture for well over a decade.”

Above: A 1981 live performance of ‘Pee-wee’s Playhouse’ in Los Angeles.