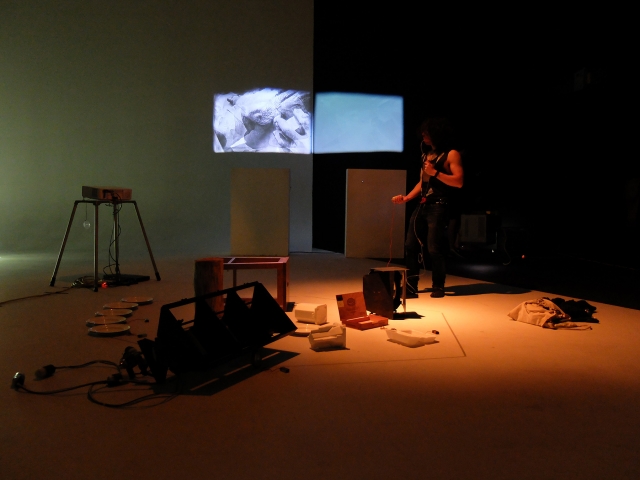 For contemporary artists, video is only one medium amongst many at their disposal and, considering installation and alternative exhibition strategies, this allows for refreshing and provocative points of intersection between video and various sets of practices. The elements of what we now call installation have been present in video art since the 1960’s when Nam June Paik, the “father of video art,” used multiple monitors in his installations. Paik proposed that video could be interactive and used to advance the creation of environments for viewers to enter and experience, thus expanding the phenomenological impact of the work. Given the effortlessly collaborative nature of CalArts, many students in the School of Film/Video and beyond have chosen to expand their practices in order to create experiences of the moving image that extend beyond the single monitor and the darkened room.

This Spring semester, the School of Film/Video has been thriving on such innovative works and considerations.

During the week of March 7-11, guest artists, the filmmaking duo Sandra Gibson and Luis Recoder, led a workshop through which they encouraged students to rethink an already completed work or a work in progress in terms of the space in which it could exist, challenging the norm of single channel or black box presentation and considering film and video art as immersive experiences. This workshop played a significant role in the students’ considerations for future work, as well as in the future of the school itself as a collective expression of this vanguard.

Christina Nguyen (Film/Video MFA 16) recently exhibited a three-projector 16mm installation to illustrate the complex ways in which we perceive color. The piece was comprised of three identical loops of a hand petting a cactus. However, each loop was assigned one of the three primary colors of light: red, blue and green. Amongst the hum of the projectors, the viewers became participants and were encouraged to interact with the beams of color, while traversing the space to reach the opposing wall. Participants became part of the action and their silhouetted hands ingeniously mirrored the action of the film itself. The sharpness in concept and execution, as well as the interactive nature of the work, resulted in a refreshing experience of light and color. 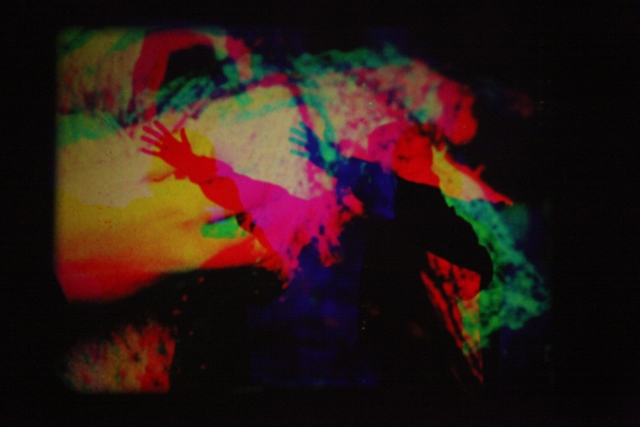 Installation by Christina Nguyen | Image: Courtesy of the artist

Eunhye Hong Kim (Film/Video MFA 18) and Audrey Davies (Film/Video-Art BFA 16), exhibited a dual projection of still photographs alongside the text of an interview which played from speakers in the Black and White studio on March 17. The photographs were derived from Kim’s short film Se Shin Sa, a hybrid of documentary and fiction in which a masseuse named Sook (Angela Kim) is contacted by a film student (Kim) for an interview. The student proposes a photo shoot that will recreate classical bathhouse paintings by Ingres. The resulting photographs by Davies are made poignant through the accompanying interview between Eunhye Kim and Angela Kim, in which she recalls her experience of first immigrating from Korea to Mexico, and then crossing the border into Los Angeles. 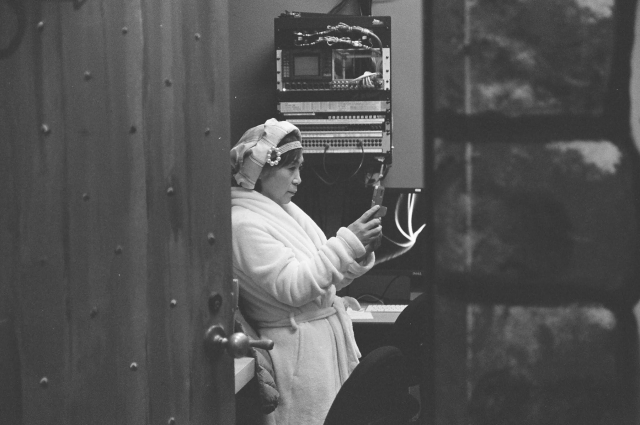 Valentina Pelayo (Film/Video BFA 2016) exhibited an untitled installation during the week of March 14 in C113, in which fabrics purchased at a Brazilian market are layered through stitching, painting and video projection, into a space dominated by tropical kitsch. The space vividly resonated with Brazilian Tropicalism, which, though mainly known through Brazilian music, has roots in Brazilian visual arts, theatre and literature of the late 1960s. Exciting tactile and visual sensations were created by adding gestural paint strokes to the fabric of the tropical prints. The video portrayed a hand browsing through the many fabrics, bringing additional rhythms and patterns that referenced women’s daily work and domestic routines. 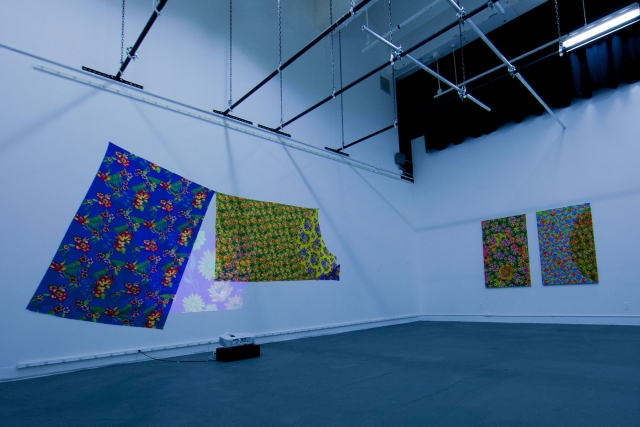 Film and video Installation is an exciting territory for students from all disciplines, and the School of Film/Video benefits from two rooms that lend themselves to this type of work, C113 and A404 (also referred to as the Black & White Studio). Some Film/Video students have also been using C117 (the “Permanent Set”) as a space for video-based installations. Other CalArts spaces in which one can see installations by students from the School of Art, Music Tech and Integrated Media Programs are D301, D302, A402, the Mint & Lime galleries, Stevenson Blanche, the Wave Cave, the Main Gallery and the L Shaped gallery as well as the Center for Integrated Media.

Over the course of the following weeks, there will be a series of video installations exhibited in many areas of the school by students in the Video Installation course taught by Film/Video faculty member Astra Price. The entire CalArts community, as well as visitors, are encouraged to come and experience these new works. From April 9-11, installations by Yunxaun Huang, Estelle Rubin and Wren Warner will be on view in A404, an installation by Vivi Fargou will be on exhibit in D301, and pieces by Regina Gonzalez-Arroyo, Emily Pomeroy and Asuka Lin will be shown in C113. From April 20-22, installations by Yanyu Dong and Lorelei Polk will be on view at C113.