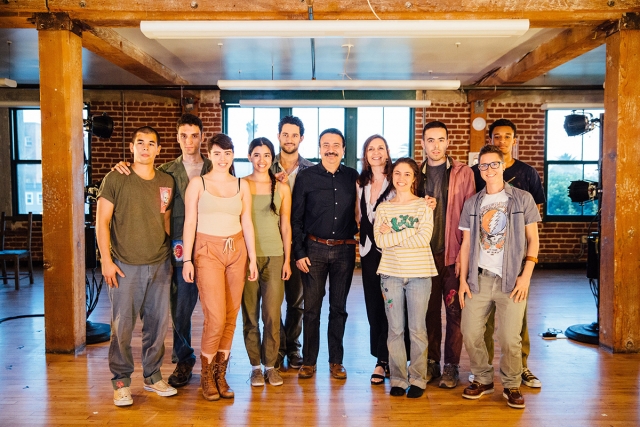 The cast and crew of ‘Shelter’ at CARECEN. | Photo: Rafael Hernandez.

**Weather update 4/8/16: Shelter is an outdoor performance with bleacher seating. Please dress warmly for the cool evening and be prepared to walk through damp grass and climb bleacher seating. We recommend comfortable walking shoes and long pants. The Shelter team hopes to share the outdoor performance with you, but in the event of rain, Shelter will be performed indoors at the adjacent Plaza de la Raza.**

At a recent conversation hosted by CalArts’ Center for New Performance (CNP), acclaimed Mexico-based director Martin Acosta said, “In Mexico, there are so many plays about immigration. Most of them are tragic. I wanted Shelter to be more hopeful.”

Last week’s conversation is only one of the many events that the production team of Shelter will be holding in conjunction with the show’s upcoming 10-day run at Lincoln Park in Los Angeles, starting with a preview tomorrow (April 7). Talkback sessions, workshops, as well as panels with immigrants and experts are also planned.

Shelter, a co-production between CalArts CNP and Duende CalArts, features the stories of unaccompanied minors crossing Central America into the United States, hitching an illegal ride on the freight train nicknamed La Bestia (The Beast). Written by CalArts faculty Marissa Chibas, the bilingual movement-based performance has two versions. A full-scale version featuring a 20-foot shipping container is being staged at Lincoln Park starting tomorrow. CNP and Duende encourages tagging the container (territorial graffiti will be painted over).

A pared-down mobile version, consisting of seven actors and seven chairs, was performed on March 18 at CARECEN, a Central American immigration rights organization.

From a review of the performance in The Los Angeles Times:

The long sequences of choreographed pantomime, studded with intermittent snippets of song, still conveyed a narrative that was visceral, powerful and moving. Under the golden glow of spotlights and with playful strobe-light effects, Shelter almost felt cinematic.

More coverage from the LA Times.

For the Thursday preview, the School of Theater is arranging transportation for CalArts students and staff interested in seeing the free show. Shelter‘s production crew is also extending a call for volunteer ushers for Shelter’s run. Dinner, a Team Shelter t-shirt and transportation are provided. Interested parties should email Paul Turbiak at pturbiak@calarts.edu.

A special alumni performance of Shelter is scheduled on April 16 at 7:30 pm, with an introduction by the youth empowerment foundation EmBrase, inspired by late CalArts student Jose “Jojo” Estrada Jr. (Theater BFA 13). An alumni after-party is scheduled at Barbara’s at the Brewery.