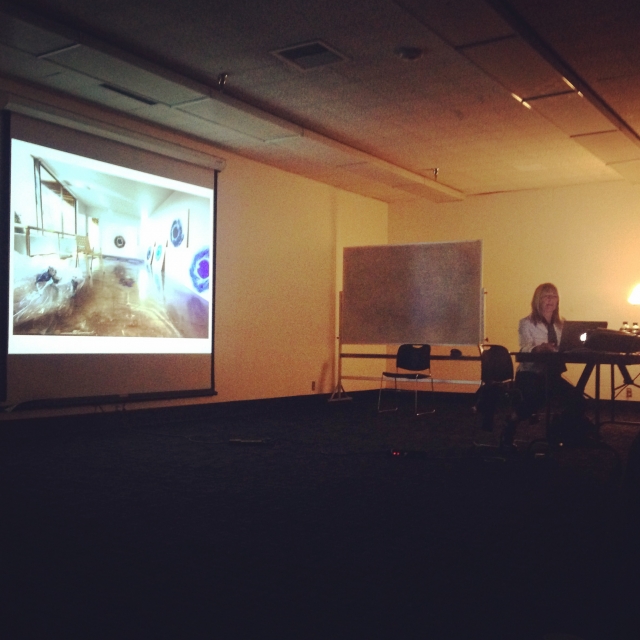 It was a full house on March 31 in the F200 classroom at CalArts for an artist’s talk by musician, songwriter and visual artist Kim Gordon, one of the founding members of the iconic alternative rock band Sonic Youth.

Gordon, on campus as part of the School of Art’s Paul Brach Visiting Artist Lecture Series, first discussed New York in the 1980s before presenting a slide presentation of her visual art practice and her process of creating. Gordon described her “noise paintings,” which incorporated “low art” and placed it into the context of “high art.”

“I was interested in taking something obscure like the names of Noise Bands and putting them into a canvas, or in other words, a context that has value in terms of the art market. Also they’re almost like T-shirts. People now wear T-shirts of places they’ve never seen or been to, and so I thought, similarly, a collector might buy a painting of a band they’ve never heard.

Gordon then shared her thoughts on New York and how she’s used art in response to the rapidly changing city:

“Definitely the city’s never looked more beautiful with bike paths and small parks, but in a way, it’s making it more beautiful for consumers; for foreign investors and for people who don’t even live in New York. These are people who are investing in condos, and a lot of the condos are being branded towards the art world in Chelsea. So anyways, this show [Design Office: The City is a Garden] reflects on the idea of the gallery being turned into a provider of design service and objects… and then who doesn’t love a hedge?”

Gordon ended her lecture by addressing the students in the room directly in what became an intimate and welcoming conversation. 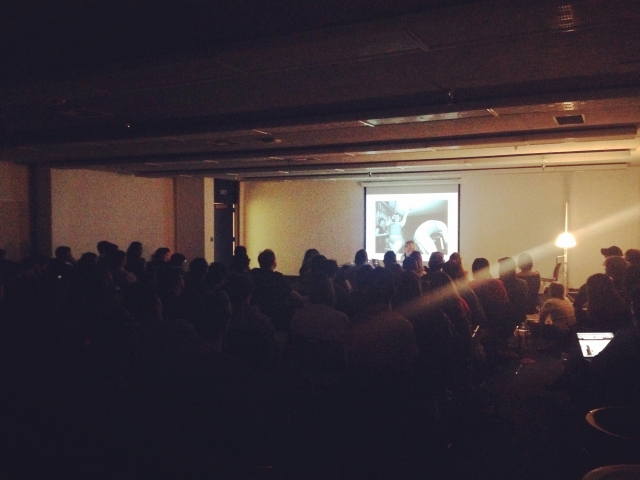 In one of the multiple ongoing exchanges between the students and Gordon, a student asked: “When did you first realize you were punk?”

“Probably when I was climbing over a fence to escape high school,” said Gordon.

Toward the end of her visit, Gordon gave a parting bit of advice for young artists:

I think you have to persevere. Just do what you kind of do. I remember when I was in art school [she attended Otis], I wanted to make art that had to do with dance and music and everyone was sort of like, ‘you can’t do that,’ and so I didn’t. And when I first moved to New York I just really wanted to be with a gallery. I thought I wanted that sort of conventional art career and to be a successful artist in that way… That’s when I realized that I can have the kind of art career that’s reflective of who I am and I don’t actually have to have one idea of what it is to be an artist. Eventually, I realized all this different kind of work I was making actually did look like it came from the same person and it did have an organic quality to it, and I understood that this is the kind of career I want. I think that’s really hard to know when you’re young, and you’re starting out. It’s really hard to have faith, but if  you follow this thread, it will lead you somewhere.”