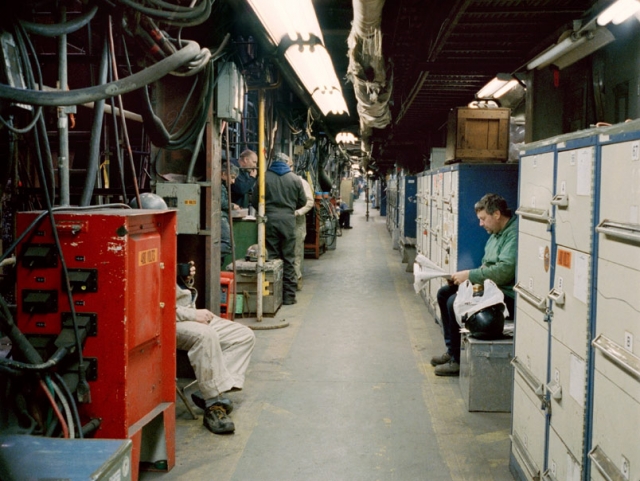 Sharon Lockhart is a contemporary artist, influential as both a photographer and filmmaker, and is currently a CalArts faculty member in the School of Art’s Program in Photography and Media. Over the past semester, she has presented a group of distinct, but interrelated works on campus: Double Tide, Lunch Break and Exit. Lockhart, a 2015 Herb Alpert Award in the Arts winner, is currently exhibiting images from her Audition series at MOCA and her Pine Flat Portrait Studio series at The Broad, among several other international exhibitions.

From her earliest works, Lockhart has been interested in the issue of objectivity in representation. Drawing from ethnographic and anthropological practices, Lockhart’s art is characterized by the amount of time spent with her subjects prior to filming and a rich collaborative process. The fundamental question that confronts ethnographic filmmaking is how to account for the presence of the filmmaker and the modifications she or he is responsible for. The task then of the filmmaker examining the representation of a community is to reveal the limitations of the form. Lockhart’s approach is to frequently employ a fixed camera and durational shots in which subtle choreography is revealed over time, endowing everyday movements with qualities of dance. The use of choreography and the fixed frame also function as a means to collaborate with her subjects, together acknowledging where the parameters of the frame exist and how a particular gesture will look. In this way, choreography becomes less about a sense of control by the maker, and more a way for the subject filmed to know where and how they are being filmed. This is the way that Lockhart’s films achieve a reflexive quality, revealing the film as a constructed work.

Recently, Lockhart presented Lunch Break and Exit at CalArts in the Film Today class, followed by a discussion moderated by School of Film/Video faculty member Bérénice Reynaud. Both films take place in the Bath Iron Works shipyard in Maine, one of the largest employers of the state. Lockhart spent a year with the workers researching the factory, paying close attention to the mid-day break and the way that unregulated time functions. In Lunch Break, the camera moves slowly down a measured path of the shipyard corridor while 42 workers take their lunch. Lockhart deliberately slows down what was originally a 10-minute film by copying each frame eight times upon digital transfer, lengthening the film to 80-minutes and rendering a uniquely photographic experience. Lunch Break is distinct from Lockhart’s other films in that the camera is always moving, bringing to light details of the space and gestures of the workers against a soundtrack of real-time diegetic sound designed by long-time collaborator Becky Allen and fellow CalArts faculty member, James Benning. 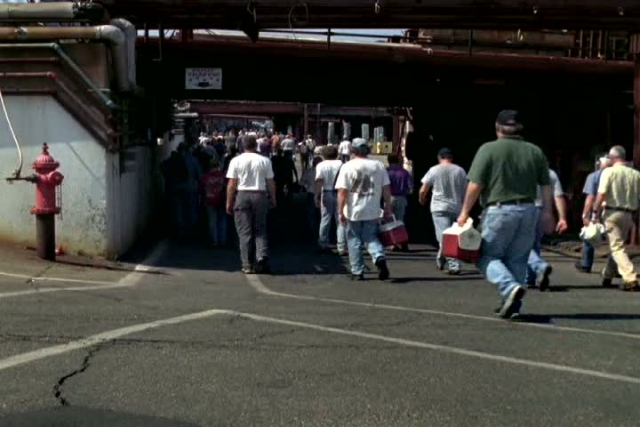 To hear Lockhart speak about her work is to hear her speak of people she deeply cares about, as she easily recalls the names of the workers and their personal histories. It is clear that Lockhart is an artist who is constantly learning from the people she works with. The workers are participants with free will to make decisions on how they want to represent themselves. Some of the workers are sleeping, others are eating, reading a newspaper, or playing cards, and their decisions help structure hers. The potency of Lunch Break emerges in this space between performativity and observation.

Both Lockhart’s still and moving images are grounded in this relationship between laboring bodies and their environments, as well as to the relation between the subjects and the frame. Rather than interpreting, Lockhart is forging an opening through which the viewer and the subjects become aware of the parameters of the constructed image. Most powerfully, this collaborative process invites the workers to think critically of their own representation, and makes space for their own creative interpretation of themselves to dictate the frame.