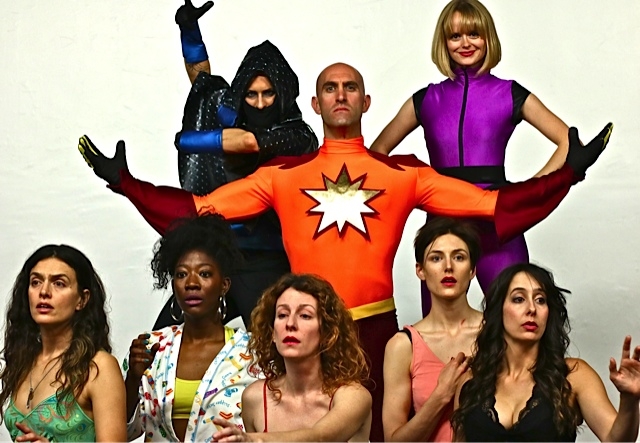 Image: Courtesy of Not Man Apart.

Through May 14, the physical theatre ensemble Not Man Apart presents the premiere of a new play, The SuperHero and His Charming Wife, at Highways Performance Center in Santa Monica, Calif.

Written by Aaron Hendry, The SuperHero and His Charming Wife follows Hero, a career superhero whose marriage is challenged when his wife develops the ability to turn into other women. Devoted to security and order, the Hero discovers that he is terrified of change.

A Hero’s tale for a pop-culture age. A philosophical and psychological journey balanced with modern action, music, and absurd humor. NMA’s signature style is athletic, dynamic, and transformative; a marriage of classical literature and explosive movement, blending the world of modern dance, colored with the NMA signature athletic style set to edgy/funky remixes of pop songs.

Not Man Apart is known for its heavily movement-based productions and for The SuperHero and His Charming Wife, CalArts alumna Michelle Broussard (Dance MFA 92) creates choreography that surprises and challenges. Zachary Davidson (Theater BFA 14) plays The Waiter and Paul Turbiak (Theater MFA 08) plays The Demon.

Stage Raw gives it a “Recommended” rating, noting: “Uncertainty is the play’s keynote, where realizing one’s dream is perilously close to having it dashed. This show, presented at the Highways Performance Space, is imaginatively directed, a funny and thoughtful leap into a dream that is also a nightmare.”

The SuperHero and His Charming Wife runs Fridays and Saturdays at 8:30 pm, and Sundays at 3:30 pm.

The SuperHero and His Charming Wife