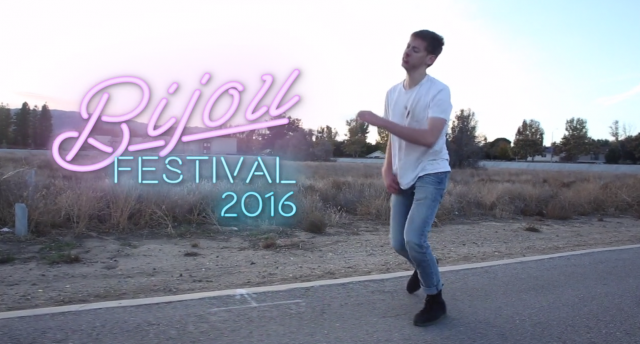 Above: Video trailer for Bijou Festival 2016.

A week-long culmination of films made across métiers during the academic year, the Bijou Festival has become much more than a tradition at CalArts. Beginning today (Monday, May 9), hundreds of films, made by both undergraduate and graduate students in the School of Film/Video, are being screened. The school’s faculty, staff and students gather in the Bijou theater to view nearly 50 hours of film and video work in what has become a vaunted and essential happening at CalArts.

Adele Horne, Program in Film and Video (PFV) faculty and this year’s festival organizer, brings a tremendous passion and spirit to the program, which features a rich scope of filmmaking perspectives. There is a palpable voraciousness present at the Bijou Festival, an eagerness to see all of the films, many of which are otherwise difficult to see. This feeling that each film is uniquely crucial is directly tied to one of the founding principles of the Institute: the vitalness of cross-pollination.

Named for the beloved theater in which it takes place, the Bijou Festival was founded nearly 20 years ago in the late 1990s when former School of Film/Video Dean Hartmut Bitomsky proposed canceling the last week of classes and to instead have an end-of-year festival to watch student work. At the core of his idea was to have an opportunity to watch the immense amount of work being created by students during the academic year that could not necessarily fit into the juried Showcase Screenings. Associate Dean Rachelle Katz explains, “We needed more time to see all the work, and we wanted to be able to show works-in-progress as well and have the opportunity to discuss the work that was shown.” According to Katz, initially, faculty and staff would host a block of time in which they selected student work to be screened, however it has since evolved into a student-curated event in which, through a lottery system, students are able to choose the host and time slot in which their work will be shown.

Perhaps one of the most important elements of the Bijou Festival is that it brings together faculty, staff and students to have an open dialogue about work being made as well as to spend a sustained amount of time together in a non-classroom setting. Experimental Animation (EA) faculty member Michael Scroggins notes, “An essential component of the festival’s design was Q + A sessions between the artists whose work was screened and members of the audience.”

With the 2016 Bijou Festival comes the addition of dinner breaks. Sometimes the best work of interpretation and critique inevitably happens in private conversations between student filmmakers and their peers as well as with faculty and staff during these interludes.

Tradition looms large at the Bijou Festival. EA faculty Maureen Selwood writes about the ways in which a creative spirit emerges from this tradition. “I have never stayed past midnight for screenings, but I did attend them where John Hawk and Gordon Kurowski accompanied films with live music, where students accompanied films with live performance, where Janice Tanaka arrived wearing wings dressed in white and where Leo Hobaica served donuts and his program became known as the Donut Show. I remember seeing the work Charlotte Pryce did with her students for the first time, marveling at these works and feeling a new passion for the kinds of work being made.”

The opportunity to see work you hadn’t previously known is an invaluable quality of the festival. At its best, the Bijou Festival style of screening films back-to-back and curating through a lottery system results in a rich intersection of films. Adele Horne writes, “Each year in the festival, I discover CalArts filmmakers whose work I didn’t know. Even in the case of filmmakers whom I already know well, I am introduced to new pieces that I didn’t know they had made.”

It is an element that drew many of us here, to forge relationships and collaborations with people who deeply inspire us and who challenge us. In 1961, Walt Disney founded a school that he hoped would encourage a cross-pollination between students and métiers because that is the way he also worked. “I’ve always operated like the princes of Serendip, who went on quests not knowing what they would find…Some of our most important discoveries have come from those who were searching for something else.” The Bijou Festival is a reminder of what a vibrant creative community has been forged from that initial conceit and the exciting ways it continues to sculpt.