We’ve updated the site! Please visit us at 24700.calarts.edu
plottwistdocumentation01

By Molly Surazhsky, a BFA student in CalArts’ Program in Art

24700 talked to the artist over several emails about his work.

24700: The materials in Plot Twist are essentially commonplace or everyday ones. Could you talk about why you chose to use these?

BJ: Most of the materials that I use can be purchased cheaply at Walmart or Michael’s. It honestly boils down to how inexpensive and economical those materials are. I think because I’m paying such a large amount of money to be at a private art school I really like the idea of using shitty materials? I like when the lack of quality is obvious. It’s both really funny and woefully honest. That’s all I can afford!

24700: There is a lot of branding that appears in your exhibition. For example, the McDonald’s Happy Meal, Costco Receipts, 99 Cents Only logo and images of yourself. In a way you are rebranding your own identity through this constant act of repetition. Could you talk about this process?

BJ: I think symbols of consumerism/capitalism are yet another way for me to express an irony within my own practice and ideology. It’s funny because, much like everyone else, I have a very cliche and art school opinion of late capitalism. At the same time, I grew up eating at McDonald’s and shopping at dollar stores because that’s what we could afford. I have a hard time negotiating the differences between my socioeconomic background and a critique of capitalism, and I think since witnessing all of the snobbery and classism that exists within the art world, I felt compelled to depict my complicated and perhaps “problematic” relationship with these corporations. At any rate, it is true that I outsourced a lot of my production to Costco and various other commercial businesses that offer printing services. I’m fascinated by all of the different printing technologies that are available to consumers.  I think my fascination with this technology is not unlike my use of commonplace or everyday materials. It has less to do with a specific critique and more to do with how pedestrian and accessible these services are. Like when I discovered that it was possible to print my face on a blanket how could I NOT print my face on a blanket? That kind of mentality. 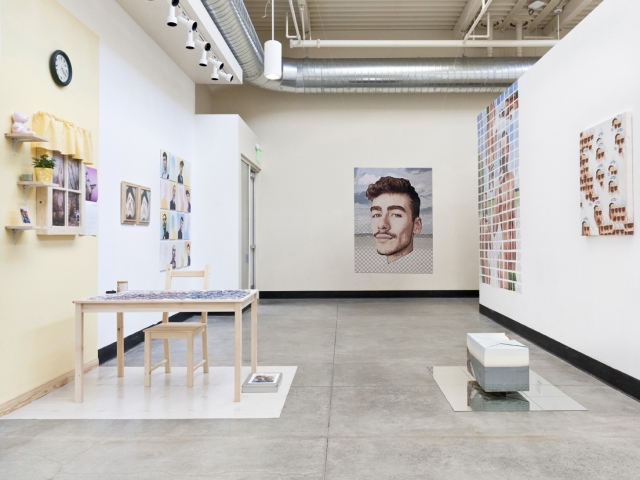 24700: Along with the above mentioned brands, you also include Donald Trump’s slogan, “Make America Great Again,“ replacing our associated image of Trump with yourself. In this way, we are subjected to confront this slogan from a different perspective and in a sense, it is, both interesting and alarming to think about the discomfort this reconfigured image might cause amongst Trump supporters. Could you talk about your choice in manipulating this slogan?

BJ: Political parody. It’s supposed to be funny! But I realize it’s not going to be funny to everyone and I don’t want to assuage a dialog or critique of that piece by simply reducing it to a joke. I guess I should point out that I made the piece using a meme app which I guess you could then say means I am interested in meme culture. But it is also well to point out that I made that piece during the very early stages of the Trump phenomenon. At the time, I never would have imagined his campaign would make it this far. I posted the original photo on Instagram in summer 2015 or something. That being said, I think it’s really interesting and worth considering how everything is a meme or joke nowadays. Like where is the seriousness in anything, you know? It’s rather alarming when you think about it. I’m also curious as to whether making a parody or meme out of something as a way to disparage it can potentially have a reverse effect. The entire Trump campaign is built upon this kind of sensationalism, is it not? That’s what I want to comment on.

24700: Something that becomes very clear in Plot Twist is the presence of selfie culture. Would you say that you are using mimicry to confront selfie culture?

BJ: Mimicry is one way to look at it. Although I feel like mimicry implies more of a critique and I’m not sure that I have one. Not yet, at least. Selfie discourse is such a huge thing right now and a lot of super-interesting critiques have emerged recently, namely in regards to feminism. I find it all very relevant; however I’m not that interested in positioning my work as either a celebration or critique of that culture. I like to think of my work as both! It is worth noting, however, that I’ve always been very much invested in my own image. Long before selfies were a thing I was photographing and drawing myself. I think for me selfies are simply an evolution of that investment. The only difference is that we have a word for it now. I feel like the popularization of selfies was like a coincidence that I embraced. My need to perpetuate and externalize and express myself, however, has always been there. Growing up in a rural area, the internet was a place where I could express myself without the fear of harassment or bullying. I think social media is an interesting, if not crucial, platform for youth and teens growing up in these areas. The internet provides a sense of community or world outside of your immediate surroundings, an aspirational one, where people of color or queer folks or women or basically anyone who isn’t a straight white male can feel safe and a little bit less alienated. Furthermore, social media enables you to display and externalize a highly curated version of yourself. An idealized version of yourself. There is an inherently performative element predicated upon the creation of online identity, I think! I certainly view it as performance. @blakejacobsen is a caricature of myself. 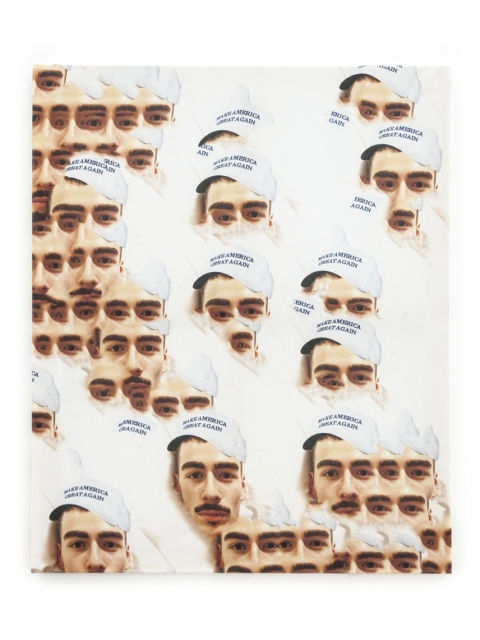 24700: Could you talk about the childhood photographs you used in your exhibition and what dictated your decision process?

BJ: Yes! One of the themes that I explore within my work, like I mentioned, is what I loosely refer to as “representation of self.” Basically what I mean by that is experimenting with self-portraiture and appropriation of early childhood photographs. I’m really interested in how photographs, particularly portraits, contain meaning. I’m interested in how those photographs contain a history and definition of self through the lens of, for example, close family members. More specifically yet, I’m interested in how these histories and definitions uphold a certain expectation of identity, gender, sexuality, etc. For my show I solicited photographs from my family by giving them an assignment. I asked them to send their favorite picture of me and explain why it is their favorite, why they chose that picture, what makes that picture special to them, etc. I stressed that they give their decision considerable thought and asked that they try to look “beyond the surface of the photograph.” I gave them the example that my Dad’s favorite photo of me might be the one in which I look just like him. That it’s his favorite because my eyes, ears, nose, and mouth are identical to his, and because I’m wearing denim on denim or something. I wanted to know all of the memories associated with that photograph. I wanted to understand or perhaps confirm the identity that my family cherishes most. What I found is that these early photographs do in fact contain rigid expectations and definitions of self. Moreover, these photographs sort of reflect the ideals of the people whom they belong to. Upon accumulating all of the photos and having that realization I began to think of ways in which I could destabilize some of those constructs.

24700: In Plot Twist, you invite audiences into a domestic space, featuring an American decor we’re all culturally familiar with, but instead of family portraits or still life paintings frequently found in these homes, we are presented with your image and sexuality put on display in a way that simultaneously holds a comfort and a tension. Could you talk more about this?

BJ: I definitely wanted to recreate the place where I grew up. I was inspired by various memories that I have of my grandma’s house and focused on emulating her aesthetics for this show. Her favorite color is yellow. She loves birds (particularly hummingbirds), Thomas Kinkade, puzzles, stuffed animals, flowers, Our Daily Bread, etc. I love my grandma but we also have many differences. I wanted to articulate our differences by juxtaposing her design sensibilities, which have a stereotypical tie to conservative, evangelical culture, with explicit images of my queer sexuality. My religious and conservative upbringing certainly trivialized my sexuality for a long time and is largely to blame for why I’m still closeted to my family. It’s tricky, though, and that’s ultimately what I want to communicate. While this work is on one hand very much wrapped up in ideas of sexual liberation, it is also just as much wrapped up in talking about how it’s really not that simple. I am attempting to reverse a lifetime of conditioning but also demonstrating, if not highlighting, my inability to do so entirely. 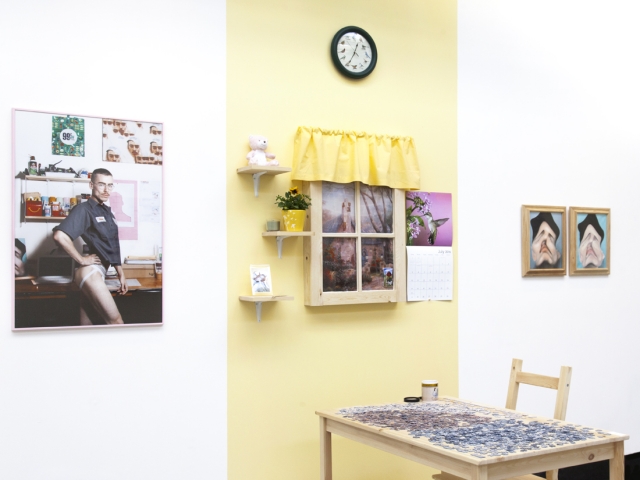 24700: In some of the photographs, you feature yourself, in what clearly appears to be an artist studio surrounded by art materials (Mod Podge, spray paint, a Macbook, etc.). In this way, there appears to be a play on “the artist as trope” in your exhibition. How do you confront this romanticized vision of “the artist?”

BJ: The story behind those photos goes something like this: My grandpa, dad, uncle, and brother comprise a family owned and operated truck repair business in Florida that I’m not a part of. I have a lot of guilt associated with my decision to be an artist and go to an expensive art school rather than working for the family business. In order to unofficially become part of the business I replicated the A & E Truck Service, Inc. work uniform, embroidered my name in pink/orange, and then wore the uniform in the context of my individual workplace, an art studio. When I decided to embody and perform the uniform in my studio a lot of stereotypical images came to mind. The quintessential “artist in their studio” images that we’ve all seen and that I assume you’re referring to in this question. Deciding to crop the work shirt and wear a jockstrap was my way of putting a twist on that trope or tradition. In addition to that, I incorporated the homoerotic element because it seemed extremely opportune considering that mechanics are often stereotyped as masculine/straight while coincidentally being a popular genre of gay pornography. I also simply wanted to illuminate the fact that I’m a gay male that grew up cutting scrap metal in order to save money for my first car, and who knows a thing or two about car mechanics, but also loves fashion and making homemade holiday cards and scrapbooking and like that’s OK and get you a man that can do both! 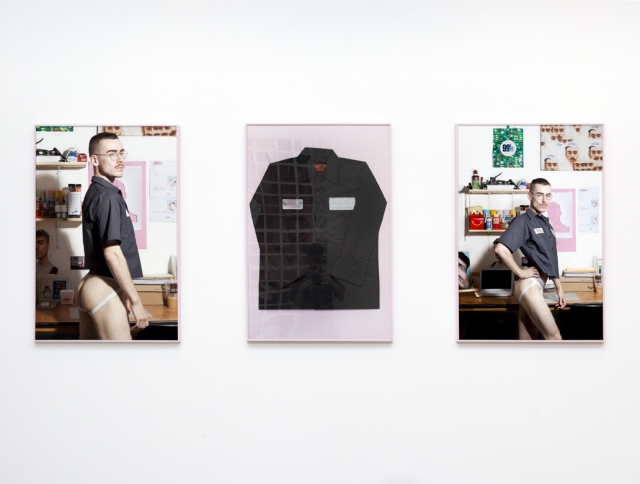