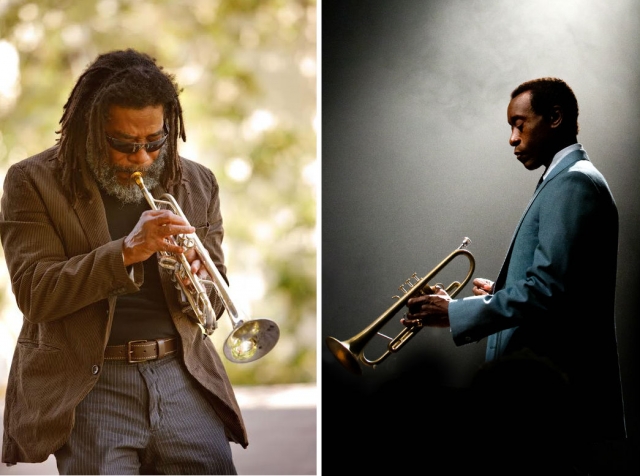 CalArts has named actor, filmmaker and School of Theater alumnus Don Cheadle (Theater BFA 86) and legendary trumpeter and composer Wadada Leo Smith, a former faculty member of The Herb Alpert School of Music at CalArts, as recipients of honorary doctorate of arts degrees at the annual graduation ceremony on Friday (May 13). Cheadle and Smith will return to campus and reflect upon their respective journeys and their achievements when they address the class of 2016.

Smith has been active in creative contemporary music for more than 40 years. He’s been described as “one of the most vital musicians on the planet today” by Coda magazine, and his music was called “haunting, meditative, and transportive” by the Los Angeles Times. A long-time CalArts faculty member until his retirement in 2013, Smith was named a Pulitzer prize finalist in music (also in 2013) for his album, Ten Freedom Summers.

Above: Vijay Iyer and Wadada Leo Smith talk about their album, ‘A Cosmic Rhythm with Each Stroke.’

Since leaving CalArts, Smith continues to write and record music. He released his latest album, A Cosmic Rhythm with Each Stroke, in March and was named Composer of the Year by Jazz Journalists Association (JJA).

Academy Award-nominated actor Cheadle is known for iconic roles on the big screen such as Paul Rusesabagina in Hotel Rwanda (2004) and earlier this year as jazz legend Miles Davis in the biopic Miles Ahead, which he also directed. The Hollywood Reporter asserted that Cheadle’s characterization of Davis “nails the subject’s nicotine-scratched rasp and his eccentric irritability and paranoia with discerning understatement.”

Above: Don Cheadle portrayed Miles Davis in ‘Miles Ahead,’ which he also directed.

The versatile and in-demand actor (whom the Chicago Tribune noted “is one of a handful of American actors who, practically everybody agrees, is great”) also reprised his role as Lt. James Rhodes / “War Machine” in Marvel’s Captain America: Civil War, which was released last week.

On the small screen, Cheadle continues his Golden Globe-winning, Emmy-nominated performance as Marty Kaan in Showtime’s House of Lies, which is now wrapping up its fifth season.