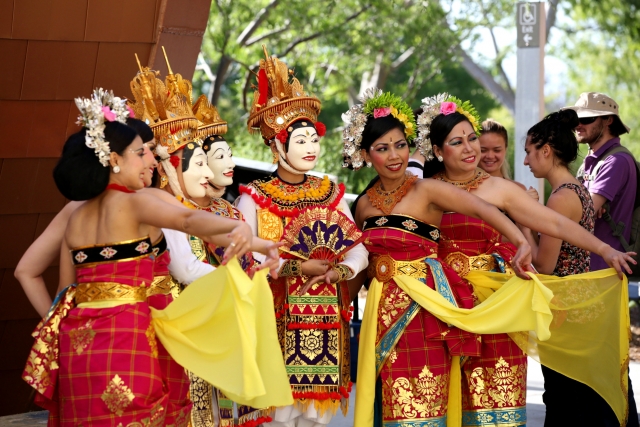 Since the early ’70s, the annual CalArts World Music and Dance Festival has brought musical traditions from around the world to the CalArts campus. This year the festival consisted of eight outdoor concerts that took place over the course of three days (April 29 – May 1).

Day one featured Javanese music and dance. The CalArts Javanese gamelan ensemble played experimental compositions under the direction of Ki Djoko Walujo Wimboprasetyo. The dance accompaniment was led by Nanik Wenten and consisted of two court dances, Floret from the Paku Alaman palace and traditional Serimpi Pandelori from the Hamengkubuwono court in Central Java.

Following that musical array, the CalArts Balinese Gamelan Gong Kebyar played Burat Wangi as a dance ensemble performed the dance Taman Sari. Gong Kebyar is one of the most elaborate and expressive forms of the Balinese gamelan orchestra and is performed instrumentally or for dance accompaniment.

The third concert, titled A Mystical Journey, joined artists from Iran and Palestine in order to showcase the diversity of devotional expressions.

As a following act, the CalArts World Percussion ensemble brought to the stage an eclectic mix of percussion, drumming and world music.

The grand finale of the three-day festival was an explosive session of African Music and Dance led by Nani Agbeli and Andrew Grueschow.