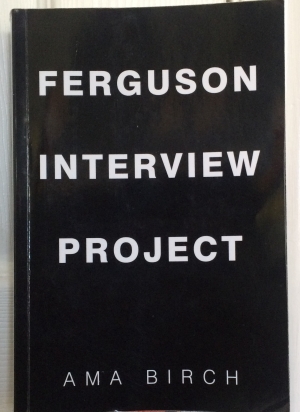 Birch began the project in response to the shooting of Michael Brown in Ferguson, Mo., by a police officer in August 2014, which sparked outrage across the country and started a national dialogue about unconstitutional law enforcement and policies and practices that may condone the harassment and killing of black men and boys in the United States.

The book consists of 20 interviews with 21 people who have a connection to the St. Louis/Ferguson area, including Brown’s friends and neighbors, religious leaders, artists, curators, elected officials and law enforcement.

“The general attitude that I encountered a lot was that I was talking to a group of people, a community, who had been marginalized, and who felt that mainstream media had really done them a disservice,” Birch said during a phone conversation with 24700. “For me, the focus was always about them, the community, getting to have their say.”

Birch also included people of varying socio-economic and racial backgrounds with divergent opinions. Her hope in doing the project and having these sometimes opposing positions side-by-side in her book is to provide as complete a picture of the situation as possible to further enable the conversation about the criminal justice system and the truth surrounding Brown’s death.

And though the interviews are about Brown and what happened after his death, the story that Birch is trying to unveil in her book is a universal one. “We penalize people based on race, gender and sexual orientation. We box them in and never see them as the full humans they are,” Birch said. “Criminal justice reform is not just an American issue.”

Ferguson Interview Project is available in ebook and paperback on Amazon, and Birch has a campaign on GoFundMe to help raise money for the continued marketing and promotion of the book.