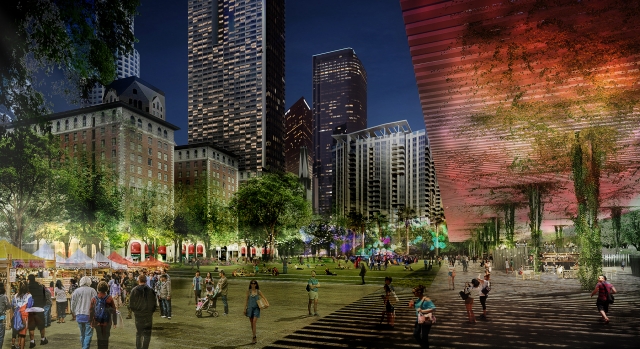 A rendering of the lighted canopy from Agence Ter & Team’s proposal for Pershing Square in Downtown Los Angeles.

CalArts alumnus Allen Compton (Art MFA 95), owner and principal architect of SALT Landscape Architects, has developed projects for clients in both the public and private sectors, including the Los Angeles Unified School District, Sony Studios and the Trust for Public Lands. He also designed the Wild Beast Garden for CalArts.

When Pershing Square Renew opened an international competition to re-imagine and redesign Downtown Los Angeles’ Pershing Square (the city of Los Angeles’ oldest park), Compton put together a team to enter. SALT Landscape Architects teamed up with Paris-based company, Agence Ter, and several other local firms for the competition, calling themselves Agence Ter and Team. Last month, they won the competition, with their design earning the highest number of votes from the public and a unanimous vote by the jury.

The top designers in the world brought four extraordinary visions to Los Angeles, and one stood out above all. Agence Ter and their team captivated the jury and the public with its elegant simplicity, with its connection to the surrounding streets and the city beyond them, and with the canvas it provides for programming, activity and for the community’s own dreams and desires.

Agence Ter and Team is designing a space that welcomes the public and is not isolated from the city. The park is currently on top of the parking garage, connected to the street by stairs and ramps, making it easy for pedestrians to miss it. Agence Ter and Team have proposed to flatten the park in what Henri Bava, founder and director of Agence Ter, calls a “radical flatness.” Other key features of the redesign will be gardens, a water recycling system, a pool that will reflect the historical Biltmore Hotel, as well as a smart canopy designed by artist Leo Villareal that will both provide shade during the day and light up at night. 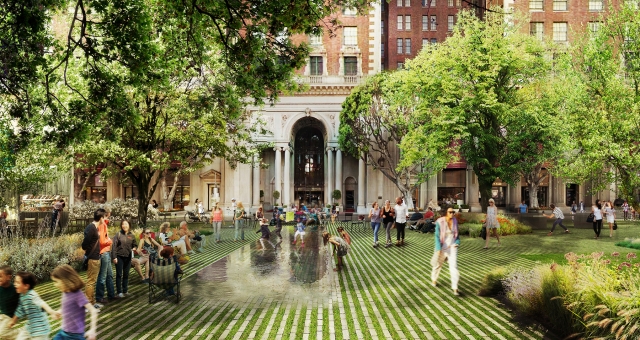 A depiction of the perspective gardens from Agence Ter and Team’s proposal, ‘The Dynamic Heart of Los Angeles.’