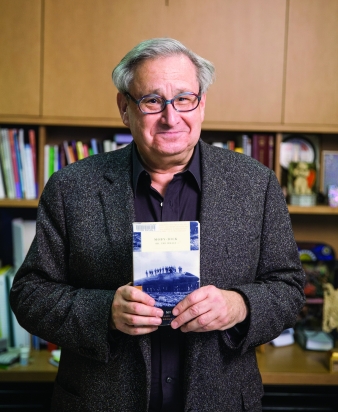 CalArts President Steven D. Lavine joined the Los Angeles Review of Books (LARB) as a Board Member earlier this spring.

Established in 2011, LARB was created, in part, as a response to the disappearance of the traditional newspaper book review supplement. It publishes reviews of new fiction, poetry and nonfiction; original reviews of classic texts; essays on contemporary art, politics and culture; and literary news from abroad. It also features reviews and articles about writing that is “often dismissed as genre fiction.”

“Steve has helped shape the literary, intellectual, and artistic scene in Los Angeles for decades now, and we are thrilled to have him putting his shoulder to this wheel, and to have his keen eye helping us imagine our future,” says Tom Lutz, editor-in-chief of LARB, in a press release.

“In a comparatively short time, the Los Angeles Review of Books has emerged as the most consistently interesting and intellectually up-to-date book review in the United States,” says Lavine. “I very much look forward to helping ensure its strength long into the future.”

Lavine is no stranger to the literary world. A former college professor, he is a graduate of Stanford University (B.A.) and earned both an M.A. and Ph.D. in literature from Harvard University.