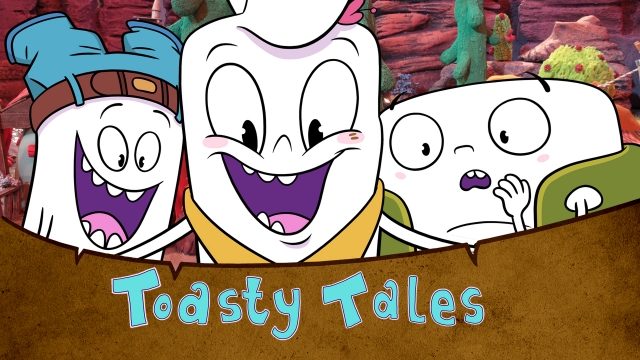 Caroline Foley, a CalArts alum, is one of the creators of the new Amazon pilot, ‘Toasty Tales.’ | Image: Amazon

On June 17, Amazon debuted the lineup for its latest “pilot season“—an allotted time period for Amazon customers to watch, review and comment on shows in development. Viewers have a voice in helping choose which programs become Amazon Original Series. Among the notable shows that have already gone through Amazon’s audience feedback pilot program are Man in the High Castle, Bosch, Mozart in the Jungle and Transparent.

There are eight shows in the current crop of Amazon pilots, including the animated children’s series Toasty Tales, co-created by CalArts alumna Caroline Foley (Film/Video BFA 07) and her partner Thomas Borowski.

Toasty Tales is an animated comedy for kids ages 6-11, featuring Waffle, Burger and Pants—three best friends who happen to be Marshmallows living in the long forgotten Move-Along National Park. Every day is a new adventure filled with strange creatures, perilous excursions, and epic tomfoolery, always served with a side of pancakes, hot off the griddle! Together, the trio explore the mysteries of Move-Along, and spin tall tales that maybe, just maybe, have a hint of truth.

While Foley is one of Toasty Tales’ executive producers, she also serves as the lead character designer. Since graduating from CalArts’ Experimental Animation program, Foley has worked as an animator on several well-known shows, from Netflix’s BoJack Horseman to Adult Swim’s Rick and Morty and HBO’s Animals.

All pilots are available online or on Amazon’s Video app for compatible TVs, connected devices and mobile devices.

Above: Watch the trailer for all of the Amazon children’s pilots currently available for review.