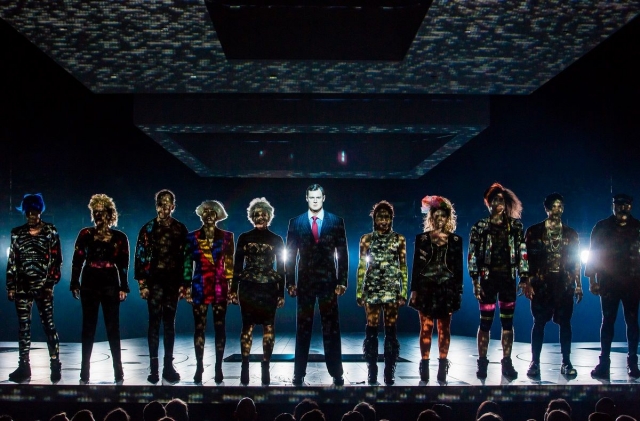 The 61st Annual Drama Desk Awards winners were announced at New York’s Town Hall on June 5. Among the Broadway, Off-Broadway and Off-Off-Broadway productions and crew that were honored was CalArts alumnus Justin Townsend (Theater MFA 03), whose work as lighting designer for the Broadway productions American Psycho: The Musical and The Humans garnered him the awards for Outstanding Lighting Design for a Musical and Outstanding Lighting Design for a Play, respectively.

Based on Brett Easton Ellis’ 1991 slasher fiction, American Psycho: The Musical (which closed last month) follows Patrick Bateman, a shallow narcissistic Wall Street businessman who spends his days in conspicuous consumption and his nights in murder and dismemberment. The Los Angeles Times described the musical as “[blending] the scary with the sardonic in a production that lethally wins style points even when making the most fiendish mess with a hatchet.”

The Humans, which runs at Helen Hayes Theater, is a family comedy set in a tiny basement apartment in New York’s Chinatown neighborhood. Tensions rise and secrets are revealed in a play where, as Variety says, “each and every character is enormously appealing, and writer Stephen Karam takes care to reveal their guarded secrets with great tenderness.”

Townsend has worked in numerous Broadway and Off-Broadway productions as a lighting designer, including A Night with Janis Joplin, Bloody Bloody Andrew Jackson and Here Lies Love. He is the recipient of an Obie Award and Outer Critics Circle Award. Townsend teaches at Brooklyn College.