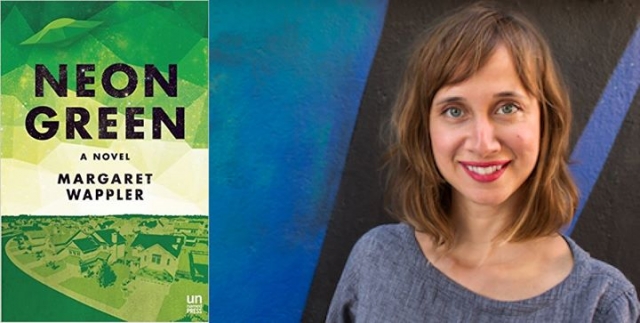 On July 12, Margaret Wappler’s (Critical Studies MFA 04) debut novel Neon Green hit the shelves. The novel is set in an Illinois suburb, in an alternate 90s where Kurt Cobain 0f Nirvana just died, the internet is in its infancy, and spaceships from Jupiter have been visiting Earth ever since getting an invitation from President Reagan.

In the center of all of this is the Allen family, whose patriarch Ernest is a staunch environmental activist. When one of the spaceships lands on their backyard, he forces the entire family to keep journals detailing the ship’s every movement, in fear that prolonged exposure to it would cause environmental harm.

Acclaimed novelist Aimee Bender calls it, “Funny, sad, weird, timely: in Neon Green, Wappler mixes up her own distinct cocktail of these into a substantive and affecting debut.”

Los Angeles-based writer Wappler has written for several publications, including the Los Angeles Times, Rolling Stone and New York Times. She can be heard weekly on the podcast Pop Rocket.