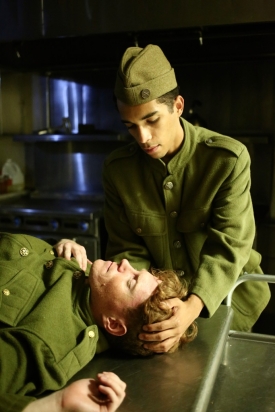 Following the critically acclaimed The Johnny Cycle: Part I – The Quick and the Dead, The Speakeasy Society, an immersive entertainment company founded by CalArtians, brings its unique, immersive storytelling to the continuation of Johnny’s story in The Johnny Cycle: Part II – The Shell.  The latest production runs for three more weekends of performances (through Aug. 13) at St. Mark’s Episcopal Church in Los Angeles’ Glendale neighborhood.

The Johnny Cycle, a planned trilogy, is loosely based on the anti-war novel, Johnny Got His Gun, by Dalton Trumbo. The Quick and the Dead, which L.A. Weekly called “ambitious and artistically satisfying,” follows the story of Johnny, a soldier conscripted into the army who loses his eyes, teeth, tongue, and all of his limbs while fighting in World War I, but still manages to live on, drifting between reality and fantasy. In The Shell, audience members are taken into Johnny’s fragmented mind and his horrifying memories of war as he grapples with what he did and what was done to him.

“What I love about this piece is that it is both a continuation and a stand-alone production. If you saw Part I, you will continue Johnny’s journey as he discovers his injuries and relives the war. But if you’re new to this story and our work, Part II offers a unique and complete experience,” says The Shell’s co-director Genevieve Gearhart (Theater MFA 12) in a press release.

Co-director Julianne Just (Theater MFA 12) adds, “In The Shell, the character of Johnny is trapped in his own private purgatory… caught in a cycle of memory, anger, regret and violence. We want the audience, like Johnny, to grapple with questions of choice, nationalism and responsibility.”