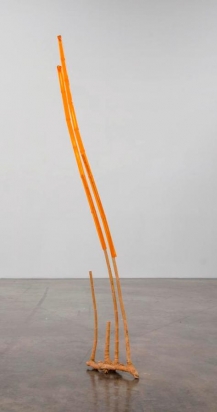 Lift One Up So I Can See Better, a solo exhibit by artist and School of Art faculty Shirley Tse, opened at the Shoshana Wayne Gallery on July 9 and is showing through Sept. 3.

Tse used Oscar Wilde’s 1888 book, The Happy Prince and Other Tales, as the point of departure for her exhibit, struck by how relevant Wilde’s parables are to today’s world where gaps between classes and cultures are constantly widening.

Using glass gifted to her by recently deceased artist Miriam Wosk as well as stadium bleachers and tripods, Tse’s work evokes eyeballs as well as gestures of ascending and descending to address both the act of seeing and the position from which one sees. She also collaborates with poet Michel Butor to produce a visual response to Butor’s poem “J…” in the form of an art book by the same title that is on display in the West Gallery.

“I usually work with sculpture and installation. The prospect of making ‘work on paper’ was liberating for me. Literally, textually and metaphorically, Butor’s words provide the architecture for these sculptural explorations on paper. I want to honor the sense of place, the richness of texture, and the obliqueness in “J…,” said Tse in the press release.

Utilizing sculpture, installation, photography and text, Tse’s work explores and expands on semiotics, the language of movement, and the integration of competing aesthetics.  A John Simon Guggenheim Memorial Foundation Fellow in 2009 and recipient of a grant from the California Community Foundation Fellowship for Visual Artists in 2012, Tse’s work has been shown around the world including the House of World Cultures in Berlin, The Biennale of Sydney, and The New Museum in New York.

Lift One Up So I Can See Better