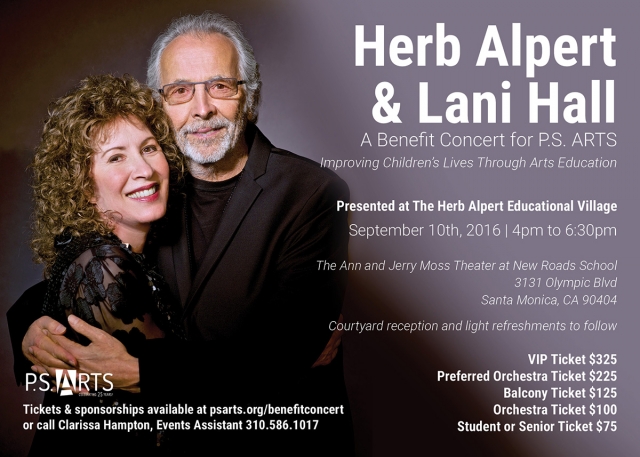 On Saturday (Sept. 10) at 4 pm, musicians and philanthropists Herb Alpert and Lani Hall give a rare performance at the Ann and Jerry Moss Theater at New Roads School in Santa Monica, Calif., to benefit the nonprofit organization P.S. ARTS, which Alpert himself co-founded with Paul Cummins in 1991.

Alpert is a Grammy-winning trumpeter and songwriter, with numerous albums attaining platinum and gold status. He is the co-founder of the label A&M Records, which housed recording artists such as Janet Jackson, The Police, Sting, Bryan Adams and The Carpenters. Singer, lyricist and writer Hall is also a Grammy winner best known for her rendition of the theme song to the 1983 James Bond film Never Say Never Again.

P.S. ARTS was created in response to significant education budget cuts in the 1970s and 1980s, which cut local tax revenues for public schools and resulted in the systematic reduction and elimination of school arts programs in California. The organization now brings arts education to students in Los Angeles County and in the Central Valley, and is an advocate for national arts education policies that increase quality and access for all students.