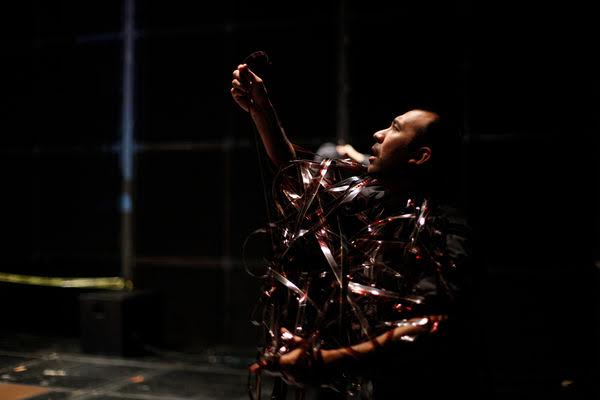 The School of Theater presents a workshop of ‘Fantômas’ this week. | Image: CNP

The CalArts Center for New Performance (CNP) presents excerpts from Fantômas – Revenge of the Image at CalArts on Thursday (Sept. 22). Created by Dean of the School of Theater Travis Preston in collaboration with renowned film theorist Tom Gunning, the work-in-progress focuses on modern urban terror using the fictional character crafted by French writers Marcel Allain and Pierre Souvestre, as well as the films of Louis Feuillade, as inspiration.

Fantômas, a sociopath and serial killer, first appeared in 1911 in Souvestre and Allain’s popular French pulp fiction / crime series and went onto appear in more than 40 volumes.

The motivation for Fantômas’ crimes resides in their effects, and even more in their affects: his purpose remains to spread terror. While power over others may motivate him, the savagery of his acts seems to justify itself through a macabre sense of aesthetics. Fantômas does not simply commit crimes, he directs an elaborate mise en scene of violence. Fantômas – Revenge of the Image engages discourses on terror and terrorism as a facet of the contemporary landscape. It investigates the intersection between terror and entertainment – uneasily united in the arena of sensation and promulgated in all contemporary media.

Fantômas – Revenge of the Image combines video, lighting and music with the use of an “audience box” to transport viewers throughout the space. After the presentation of excerpts from the production, the audience is welcome to stay for a Q&A session hosted by the CalArts Center for New Performance.

Central to the CNP mission, the Fantômas company is composed of CalArts students, alumni, faculty and professional guest artists.

Fantômas - Revenge of the Image (Excerpts)