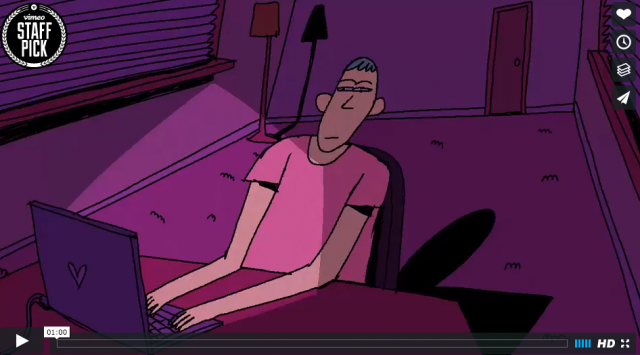 Victoria Vincent’s ‘Find True Love’ was made within a week.

While most college students are allowed to indulge in a frenzy of welcome festivities at the start of the school year, CalArts’ BFA2 through BFA4 Character Animation students began their semester a la Project Runway All Stars style. As part of their Film Workshop classes, students were given just one week to conceptualize and complete an entire short film.

As one student, Richard Tuft (Film/Video BFA 17), wrote in his film description, “No, it wasn’t a study of sleep deprivation, it was actually an assignment to help us hit the ground running.”

To date, 61 one-week films have been posted on a Vimeo channel, amassing more than 205,000 views. One of the films, “Find True Love” by Victoria Vincent (Film/Video BFA 19), was selected as a Vimeo Staff Pick Video. Vincent’s telling one-minute film focuses on the struggles of online dating.

While the film challenge has a premise perfect for a reality TV competition, with the works turned in so far, judges would be hard-pressed to tell any of these filmmakers to pack their drawing tablets and go home.

Below is a sampling of films from the challenge; all the films can be found on the 2016 CalArts Character Animation One-Week Films Vimeo channel.

Hot Day from Siobhan Ensley is an existential musing between animals on the verge of extinction.

Overweight from Yonatan Tal explores long-distance loneliness brought on by a lack of suitcase storage.