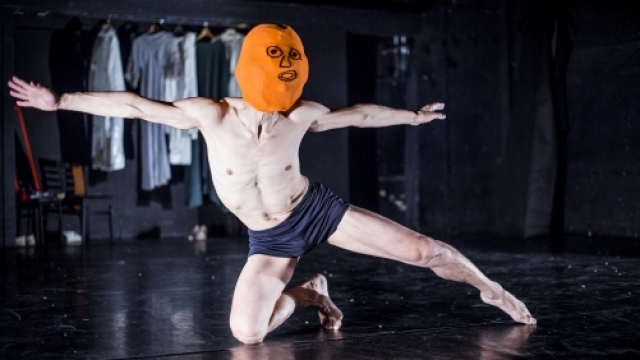 Dancer Takao Kawaguchi discusses Kazuo Ohno and his work in the video above.

This week REDCAT, multimedia performance artist Takao Kawaguchi takes on Ohno’s classic works in his solo dance performance About Kazuo Ohno – Reliving the Butoh Diva’s Masterpieces. The move to imitate and copy the butoh master’s work from video recordings of premiere performances was considered controversial by some in Tokyo’s dance community. Kawaguchi addresses the commotion in his artist’s statement about the work:

Usually characterized as largely improvisational, Ohno’s dance is unique not only for his age but also for the distinctive features of his body and movements which are essential to his dance. An attempt to copy his dance as it is, no more no less, means nothing but to suspend whatever interpretation the copier may have as well as his own beliefs, and to project himself onto the forms and shapes of the old dancer as exactly as possible. The closer it gets, however, the clearer the gap becomes, minimum but inevitable no matter how hard he tries to diminish it. The paradox here is that this very gap, nonetheless, highlights the very distinct characteristics of the copier. Copy is original.

The viewer layers the reminiscence of Kazuo Ohno onto my body, and those who don’t know Ohno’s dance, their imagination of it. The multiple images of Ohno and myself merge, surface and recede in turn. “About Kazuo Ohno” is, in a sense, a duet I dance with the illusory image of Kazuo Ohno.

About Kazuo Ohno marks Kawaguchi’s return to REDCAT; he had first performed with the Japanese multimedia performance company Dumb Type in 2003.

Ephemera and other materials from the Kazuo Ohno Dance Studio in Yokohama, Japan, and Japan Society’s archives, including posters, video, costumes and other articles, will be on view in REDCAT’s lobby after the performances.

The dance artist conducts two free workshops during his REDCAT run. On Saturday, from 1-4 pm, he presents Body Sculpting with Takao Kawaguchi, in which he leads participants through his creative process for About Kazuo Ohno – Reliving the Butoh Diva’s Masterpieces. After a discussion and viewing archival footage, participants will then sketch their images and create movements based on what they experienced. Participants should have some dance/movement experience for this workshop, and wear socks and exercise attire and are asked to bring their own video streaming device (phone, tablet, personal computer). Email Rolando Rodriguez at rrodriguez@calarts.edu to RSVP. Space is limited.

On Monday at 7 pm, Kawaguchi leads Slow Body – Brain does not have sensation vol. 27. Co-presented by Japan Foundation, Los Angeles and REDCAT, the artist dances in the nude at an almost imperceptible speed, surrounded by participants drawing the body. Unfortunately, all seats have been taken for the second workshop.