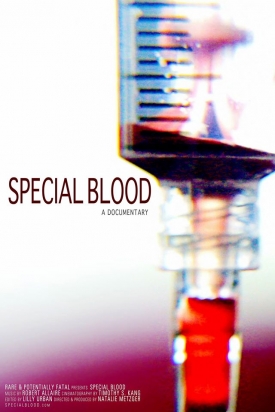 Screening across the country to sold-out audiences and positive reviews, the film follows four patients with hereditary angioedema (HAE), a rare and potentially fatal disease. They share their struggles and victories as they join together for support and to raise worldwide visibility for their community.

A genetic condition that occurs in about 1 in 10,000 to 1 in 50,000 people, HAE’s symptoms include episodes of swelling in various areas, including the hands, feet, face and airway, which could cause death through asphyxiation. Patients also often struggle with abdominal pain, nausea and vomiting caused by swelling in the intestinal wall.

Metzger, who directed and produced the film, says the project is something that she’s wanted to make for several years.

She writes in an email:

Through my own connection to this rare disease (hereditary angioedema runs in my family), I came to know many patients who shared their incredible stories with me. One common thread was the feeling shared by many patients that they didn’t have a voice. This is a group of people often overlooked by the medical community due to the rarity of their condition. Many feel isolated from friends and family who, due to lack of information, don’t understand the significance of their diagnosis.

After hearing so many of these stories again and again, I began to make Special Blood. I wanted to help raise the voices of these patients to help them be heard and understood, so the world could see the faces of real people instead of just a difficult name like hereditary angioedema. Creating this documentary and working with the HAE community has been truly inspirational. The patients, doctors, and organizations I visited all welcomed me and my crew into their homes with open arms, offering us intimate and honest views into their lives. It was amazing to meet such a diverse group of people all across the country who are united by such a rare, mysterious condition.

The documentary—as well as HAE—has been getting noticed by a larger audience through its various screenings and on the film festival circuit. In August, Metzger won the Best Woman Filmmaker Award at the Chandler (Ariz.) International Film Festival. The same month, Special Blood was selected for the Mosaic Film Festival in Illinois.

Metzger, who does a Q&A following Tuesday’s screening in Los Angeles, notes that the film’s message isn’t only for the HAE community. “It’s a message that I think is universal for all people, even those without HAE,” she writes. “You can conquer adversity even if you feel small or insignificant. You are stronger than you think.”