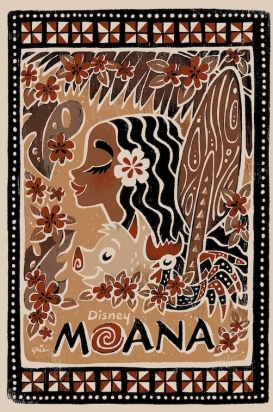 Hollywood’s El Capitan Theatre is anticipating Walt Disney Animation Studios directors Ron Clements’ and CalArts alumnus John Musker’s (Film/Video 77) newest film Moana, with special screenings of six of its most revered films: The Little Mermaid (1989), The Princess and the Frog (2009), Treasure Planet (2002), The Great Mouse Detective (1986), Hercules (1997) and Aladdin (1992). On select nights, the 7 pm shows will feature special presentations by the filmmakers, artists and voice talent in discussions and Q&As. The special screenings run through Oct. 16.

The celebration doesn’t stop there. Clements and Musker are also being honored by seven artists, including several from Walt Disney Animation, with original artwork inspired by their past films. An Art Tribute to the Disney Films of Ron Clements and John Musker premieres Nov. 19 at Gallery Nucleus in Alhambra, Calif. and will be displayed through Dec. 6. A preview of the exhibit is available at Oh My Disney.

Moana is the story of an adventurous teenager who crosses the ocean on a mission to save her people. During her journey, Moana (voiced by Auli‘i Cravalho) meets the mighty demigod Maui (voiced by Dwayne Johnson), who becomes her guide throughout the perilous quest. The CG animated feature opens Nov. 23.

Below is the schedule for the remaining Countdown to ‘Moana’ screenings:

Oct. 13-14: Hercules
Appearances by directors Clements and Musker, plus Susan Egan, who was the voice of Meg in the movie.

Oct. 15-16: Aladdin
Appearances by directors Clements and Musker, plus Brad Kane, who provided the singing voice for Aladdin in the movie.