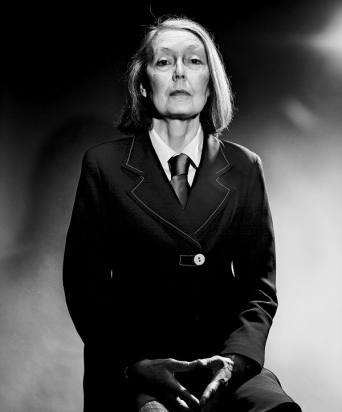 Classicist, poet, essayist and translator Anne Carson pays a visit to CalArts this week, with two reading and speaking engagements scheduled. On Thursday (Oct. 19), she is the featured guest in the Writing Now Reading Series and Seminar, presented by the MFA Creative Writing Program. On Friday (Oct. 20), The Herb Alpert School of Music at CalArts welcomes her as a visiting artist.

The highly-acclaimed Canadian writer has published numerous translations, as well as poems, essays, libretti, prose criticism and verse novels that often cross genres. Carson has taught at many respected universities in Canada and the US, including McGill University and the University of Michigan in Ann Arbor. She is the recipient of many awards and honors, including a MacArthur Fellowship, Guggenheim Fellowship, Lannan Literary Prize and a Pushcart Prize.

Carson is perhaps most well-known for Autobiography of Red, a verse novel published in 1998. In a profile of Carson for The New York Times Magazine titled, “The Inscrutable Brilliance of Anne Carson,” critic Sam Anderson wrote of Red:

Red has become known as one of the crossover classics of contemporary poetry: poetry that can seduce even people who don’t like poetry… The book is subtitled “A Novel in Verse,” but—as usual with Carson—neither “novel” nor “verse” quite seems to apply. It begins as if it were a critical study of the ancient Greek poet Stesichoros, with special emphasis on a few surviving fragments he wrote about a minor character from Greek mythology, Geryon, a winged red monster who lives on a red island herding red cattle. Geryon is most famous as a footnote in the life of Herakles, whose 10th labor was to sail to that island and steal those cattle—in the process of which, almost as an afterthought, he killed Geryon by shooting him in the head with an arrow.

Autobiography of Red purports to be Geryon’s autobiography. Carson transposes Geryon’s story, however, into the modern world, so that he is suddenly not just a monster but a moody, artsy, gay teenage boy navigating the difficulties of sex and love and identity. His chief tormentor is Herakles, a charismatic ne’er-do-well who ends up breaking Geryon’s heart. The book is strange and sweet and funny, and the remoteness of the ancient myth crossed with the familiarity of the modern setting (hockey practice, buses, baby sitters) creates a particularly Carsonian effect: the paradox of distant closeness.

Anderson conducted most of the research for his profile through email (the writer is notoriously private), and shares some of Carson’s responses:

On writing: “we’re talking about the struggle to drag a thought over from the mush of the unconscious into some kind of grammar, syntax, human sense; every attempt means starting over with language. starting over with accuracy. i mean, every thought starts over, so every expression of a thought has to do the same. every accuracy has to be invented. . . . i feel i am blundering in concepts too fine for me.”

On teaching: “when i began to be published, people got the idea that i should ‘teach writing,’ which i have no idea how to do and don’t really believe in. so now and then i find myself engaged by a ‘writing program’ (as at nyu, stanford) and have to bend my wits to deflect the official purpose.”

Above: Anne Carson conducts a dramatic reading from ‘Possessive Used As Drink (Me): A Lecture on Pronouns in the Form of 15 Sonnets’ at 92nd Street Y in New York City in 2008.