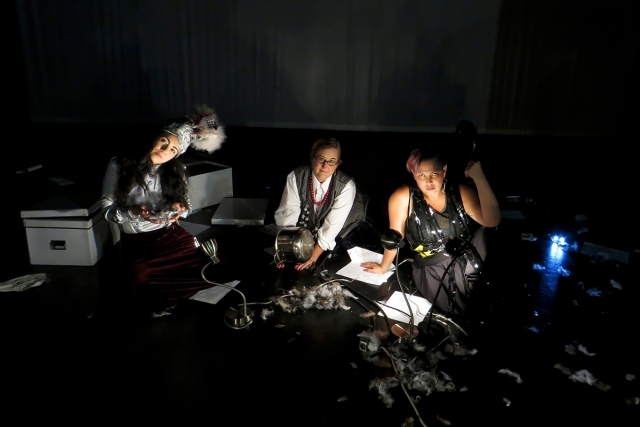 Through Nov. 13, the city of San Francisco presents the Dada World Fair, celebrating 100 years of the artistic and literary movement Dadaism. Art installations, performances, film screenings, lectures and panels explore the multiple dimensions of an art movement that defied description in its day and that left an indelible influence on the world of art, pop culture and beyond.

Closing the ceremony at 8 pm on Nov. 13 is Dada Divas, an interdisciplinary performance and research project based on the creative works, ideas and lives of important female artists who were among the originators of the Dada movement—including Emmy Hennings, Mina Loy, Elsa von Freytag-Loringhoven and Hannah Höch.

The performance, conceived and created by singer–composer and The Herb Alpert School of Music at CalArts faculty Jacqueline Bobak, illuminates historical and artistic contributions by women who were overshadowed by their male counterparts, and comments on such larger issues as the status of women, emigré life, war and consumerism. In addition, surprise pop-up performances of vignettes from Dada Divas are also set to take place throughout the festival at various times and locales.

Dadaism emerged in the early 20th century in Zurich, Switzerland, a sister city of San Francisco. Dada stood out for its attacks on bourgeois sensibilities, its challenge to the hierarchies of gallery and museum culture, and its questioning of the purpose of art and the role of the artist in society. Dadaists attacked the norms of traditional art production and crafted a radical agenda that took to task not only the traditional canon of European art but of Dada itself.

See the complete schedule of the Dada World Fair.

Nov. 1-13
San Francisco, Calif.
Tickets: “Most events are free to the public unless otherwise noted. Some events are free but ticketed. Some have exorbitant admission fees and vague instructions on how to attend.”
See complete schedule