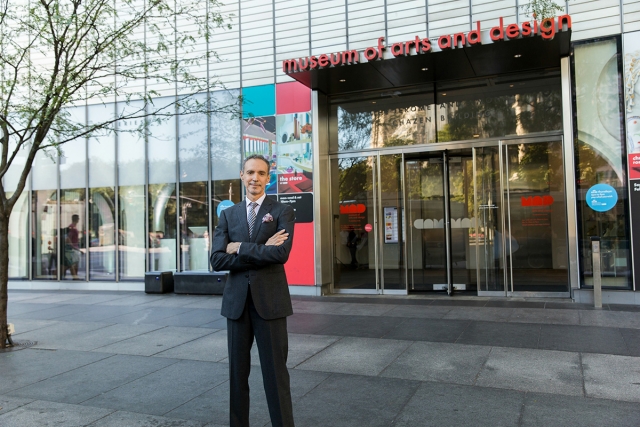 On Oct. 3, Jorge Daniel Veneciano (Art MFA 91) took the reigns at The Museum of Arts and Design in Manhattan. As reported in The New York Times by Robin Pogrebin, Veneciano left his director’s post at El Museo del Barrio after two years because he’d “fallen in love with MAD” soon after its reopening in 2008.

Currently located at Columbus Circle, the museum has had an interesting 60-year history. Originally named the Museum of Contemporary Crafts, it became the American Craft Museum in 1986. In 2002, its name changed again, when its curatorial purview expanded to include architecture, fashion, interior design, technology and performing arts. A long struggle for preservation preceded the museum’s move from 53rd Street to Columbus Circle. Identity and visibility in a city with so many world-class museums has proved challenging.

From the Times article:

[Veneciano] said he was excited to lead an institution like the Museum of Arts and Design, partly because it was easier to have an impact on a modestly sized operation. “They can function like schooners, in contrast to the mega museums that are like juggernauts,” Mr. Veneciano said. “With smaller institutions, you can make a difference.”

Diversity and education have always been among Veneciano’s top priorities. Also from the Times story: “Being inclusive is not an external agenda, but integral to fulfilling the mission. I try to bring diversity wherever I go, and I reject the notion of culturally specific institutions.”

Veneciano brings a wealth of experience and accomplishments to his new post. After earning his MFA from CalArts, he worked in L.A.’s Department of Cultural Affairs for three years before a stint at the Studio Museum in Harlem from 1994 to 1999. Veneciano directed the Paul Robeson Galleries at Rutgers University in Newark, N.J., from 2005 to 2008, and directed the Sheldon Museum of Art in Lincoln, Nebraska from 2008 to 2013. In addition, he has taught at Columbia University and Rhode Island School of Design, and edited or contributed to books including The Geometric Unconscious: A Century of Abstraction (Sheldon Museum of Art 2012), Fabulous Harlequin: Orlan and the Patchwork Self (University of Nebraska Press 2010) and Imago: The Drama of Self-portraiture in Recent Photography (Paul Robeson Gallery, Rutgers 2007).

Veneciano was born in Villa María, Argentina, and raised in Los Angeles. He earned a BA degree in Philosophy and Political Theory from U.C.L.A. and a PhD in English and Comparative Literature from Columbia University.