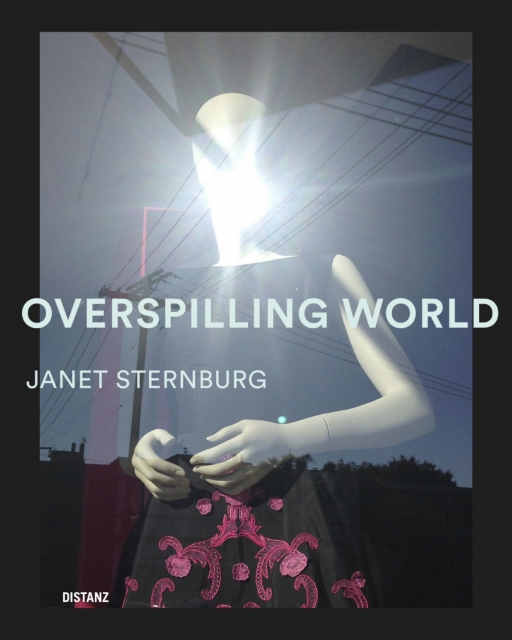 Janet Sternburg: Overspilling World is a new 144-page monograph by Janet Sternburg that showcases the artist’s photographic art practice. Rather than only presenting Sternburg’s imagery, however, the book also encourages readers to take a deeper, almost philosophical, approach to photography—and to re-examine the way they see the world. In the book’s foreword, “Both sides of the moon,” German filmmaker, photographer and author Wim Wenders reflects on Overspilling World.

This book makes you understand the act of seeing
and the reflection that might lead to a photograph in a whole new way.
This book about the nature of photography is intense and confusing,
but definitely essential.
It makes you reflect upon photography,
it reflects all our ideas about it and throws them back at us.
It shows us a kaleidoscope of reflections,
image upon image
layer upon layer,
light upon light,
and world upon world.

A writer and fine art photographer as well as former CalArts Critical Studies faculty member and wife of President Steven D. Lavine, Sternburg uses early iPhones and single-use cameras to capture “living perception,” without the assistance of optical or digital manipulation. Overspilling World traces the artist’s evolution from an already-established writer who first picked up a disposable camera in 1998 while staying in San Miguel de Allende, Mexico.

Many of her images include reflections and refractions of light and scenes shot through windows, demanding a secondary viewing of the photograph. While some photographers may think that the iPhone or disposable cameras are a less desirable choice with which to create their work, Sternburg instead embraces those imperfections.

She writes in Overspilling World:

The fixed focus means that my photographs can’t be absolutely sharp. I am not bothered by this; again, it’s a limitation I’ve embraced. A little blur can be a wonderful thing, releasing us from the preference for sharp edges that separate one thing from another. Frankly, I’ve often wondered why, in the world of photography, there has been such a focus fetish. We don’t usually see the world with razor-sharp clarity; twenty/twenty vision is, I think, only a golden mean of seeing, more of a Platonic ideal and not something to necessarily strive for in one’s own work. Little by little, the throwaway helped me to find a way of seeing closer, I believe, to the way our minds work.

The monograph’s title is a reference to a quote from the French philosopher and phenomenologist Maurice Merleau-Ponty (1908-61), who wrote, “Far from a sequence of snapshots, living perception is experienced as an ongoing flow of perspectives on coherent things amid an over-spilling world.” In the book, Sternburg responds to the philosopher’s aforementioned words:

‘Living perception’—what a beautiful idea, that perception itself is alive, as much as any other aliveness in the world. I asked myself, could a still photograph embody living perception? Can photography, not a time-based medium, render the over-spilling world in its abundance and complexity? To these questions, I say ‘Yes.’