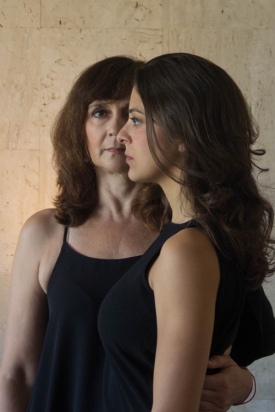 Marissa Chibas and Paula Rebelo for The Second Woman

Come out to the Bootleg Theater this weekend for the premiere of The Second Woman, a two-character play written and performed by CalArts School of Theater faculty Marissa Chibas, with alumna Paula Rebelo (Theater BFA 13). The production also features a creative team composed of CalArts alumni from the Schools of Dance and Music.

The production is inspired by the 1977 film Opening Night by actor, director and screenwriter John Cassavetes, in which a fading broadway star struggles to cope with her own mortality and painful personal history after witnessing the death of a young fan. The Second Woman builds on this narrative by adding source material from the Elysian mysteries of ancient Minoan culture, speaking to larger themes of transformation, ritual and confronting the ghosts of our pasts.

Chibas is a writer and performer and recipient of the 2015 TCG Fox Fellowship in Distinguished Achievement. She has acted in more than 50 productions and two dozen American premieres including the Broadway plays Abe Lincoln in Illinois and Brighton Beach Memoirs. Her silent film/performance piece, Clara’s Los Angeles, was presented at REDCAT’s NOW FEST and the San Diego Latino Film Festival.