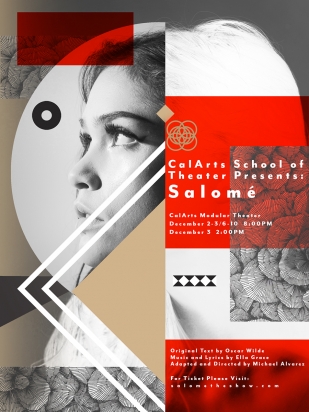 Through Saturday (Dec. 10), CalArts School of Theater presents Salomé, a reimagining of Oscar Wilde’s 1891 eponymous play, at the Modular Theater.

Drawing from biblical passages, Salomé tells the story of Princess Salomé of Judea, stepdaughter of King Herod, who becomes enthralled by the prophet, Jokanaan (John the Baptist). After he refuses to reciprocate her advances, she performs the infamous dance of the seven veils for the King to obtain the prophet’s severed head on a silver platter.

“This production infuses the classic text of Wilde with a vibrantly original pop/rock score,” according to the event listing. “Through song, the characters are liberated to speak their truth beyond the written text and fight to free themselves from the historical narrative they are trapped in.”