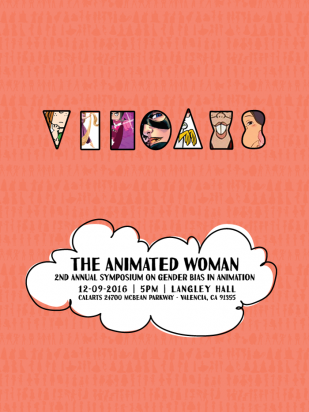 This Friday (Dec. 9), the Program in Experimental Animation at CalArts presents Sidekicks, Nerd Girls, Tomboys and More: The Animated Woman Symposium on Gender Bias in Animation at Langley Hall. This is the second year CalArts has presented students’ final work from “The Animated Woman,” a semester-long course that explores gender issues within the animation industry both on and off-screen.

Students from the Character Animation and Experimental Animation programs, as well as Sound Design, Stage Management and Fine Art, will present projects which include live and animated works, installations, drawings, dolls, songs, zines and keynote presentations.

Symposium originator and CalArts faculty Erica Larsen-Dockray (Film/Video BFA 09, MFA 12) says working with students from varied backgrounds and artistic disciplines was important because they reflect “perspectives from marginalized communities as they investigate animated characters and issues of biases, which in many cases, has impacted them directly.”

The evening begins with opening remarks by CalArts Provost Jeannene Przyblyski and an introduction to the course by Larsen-Dockray. A Q&A follows the presentations. This year, six students share art work that respond to gender bias in animation. The exhibit will be on view at Langley during the presentations.

This year’s featured work are: