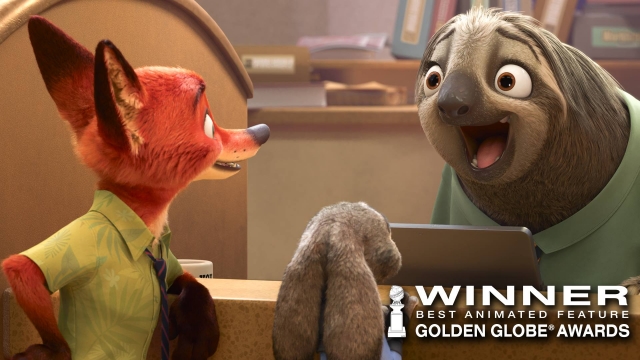 At Sunday’s (Jan. 8) Golden Globe Awards, which honor the best in film and television as selected by members of the Hollywood Foreign Press Association, many winners and honorees took to the dais not only to thank their families and teams, but also to speak to the larger television audience about issues of diversity, fairness and compassion.

Such was the case when Zootopia won Best Animated Motion Picture. When directors Byron Howard, Jared Bush and Rich Moore (Film/Video BFA 87) claimed their award onstage, Howard said, “We wanted Zootopia to be a film for kids, but also for adults, that talked about diversity.”

CalArts alumnus Moore expanded on the film’s themes backstage at the Globes. According to Deadline:

Being able to take something from our childhood, those classic Disney films and make it about something. It’s about bias, discrimination and racism and the damage it does to our society; the damage of leading by fear. To put that in a form that wasn’t polemic, but a piece of entertainment first, but had a strong core to it, and have an audience —both children and adults–think about it; that’s the thing that got me charged up about this film.

Zootopia competed against the films Kubo and the Two Strings, My Life as a Zucchini, Sing and Moana, directed by director and CalArts alumnus John Musker (Film/Video 77).