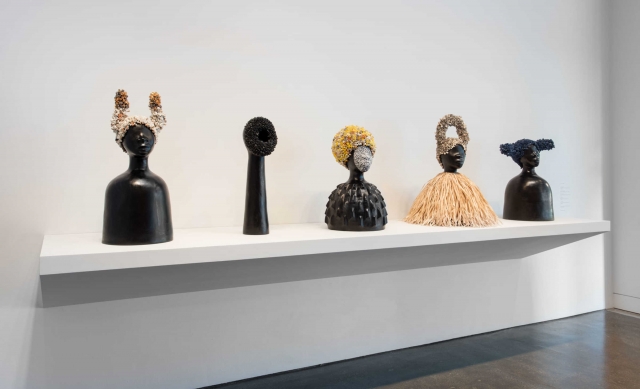 Simone Leigh, the Brooklyn-based multi-disciplinary artist spent the whole week on campus giving lectures and conducting studio visits with students. She was one of five artists to each receive the $75,000 Herb Alpert Award in the Arts (HAAIA) last May. Since 1994, the Herb Alpert Foundation, in collaboration with CalArts, has been awarding the unrestricted prize to exceptional mid-career artists in the fields of dance, film/video, music, theatre and the visual arts.

Leigh says the Alpert Award has helped to further her career in a number of ways, including increasing the visibility of her work on the West Coast. “I feel like I’m now starting to have a relationship with artists here. Before, I felt very detached from the West Coast art scene, LA specifically. The award has opened a new world of art to me and it’s been interesting to compare and contrast the two different art worlds.”

Leigh’s past performative works, site-specific to Brooklyn, include The Free People’s Medical Clinic (2014) and The Waiting Room (2016), which were recreations of the Black Panther Party’s radical community health care programs. Also drawing inspiration from the United Order of Tents, a secret society of black nurses that dates back to 1897, Leigh worked with local community organizations to turn the gallery space into an after-hours underground clinic for women.

In an interview appearing on the Alpert Awards website, Leigh says:

This society of black nurses dovetailed with my budding understanding of black radical medicine as a social necessity. Others of my very educated colleagues had never heard of them. When Creative Time asked me to do a performance, I envisioned a project that would involve self-empowerment and self-defense strategies in this community of Brooklyn. Black nurses would allow me to continue to draw attention to labor and labor as a performance. Just the idea of the existence of the United Order of Tents was so thrilling.

Last year, the Hammer Museum hosted Leigh’s first solo exhibition in Los Angeles, which examined “the construction of black female subjectivity and economies of self-preservation and exchange.” The show featured sculptural works, video installations and large architectural structures that “make symbolic reference to the black body,” as well as the visual traditions of the black diasporic experience.

The exhibit also included a performative lecture with Leigh and Rizvana Bradley, assistant professor of film and media studies and African-American studies at Yale University, as part of the programming organized by the Hammer’s Bureau of Feminism initiative.

Leigh is honored to have received the Alpert Award, and says that the greatest benefit of having its monetary support is the freedom it has given her to experiment with her work. “It’s allowed me to continue to take real risks when I wanted to without the fear you have when you have to really worry about paying bills. I think that this was definitely a year that was full of risk-taking.”