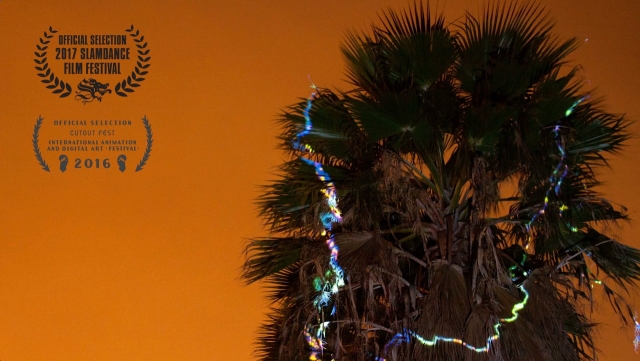 From Jan. 20 through 26, the annual Slamdance Film Festival returns to Park City, Utah to screen work by emerging filmmakers and low-budget independent films. Among the roster of films are a number by CalArtians.

Part of the Narrative Shorts program is Rob Chih-Wen Lo’s (Film/Video MFA 08) A Doll’s Hug, also a world premiere. The short film follows a Taiwanese boy living in a world full of Barbie dolls, and looks at how he learns to fight against the world’s violence. Narrative Shorts plays Jan. 20 and 24.

The Anarchy Shorts program includes the world premiere of In a World of Bad Breath starring Oates Wu (Film/Video MFA 15) and Asher Knowles. The film, directed by Christopher Graybill, follows Unyen as he goes for a walk and finds himself in a frisky mood. Also in the program is Jack Turpin’s (Film/Video BFA 15) and Davy Walker’s The Box, an expressionistic journey through the gilt-pop-entrapment in which humanity finds itself. Anarchy Shorts screens Jan. 21 and 23.

Above: Trailer for Bronwyn Maloney’s ‘Serpentine.’