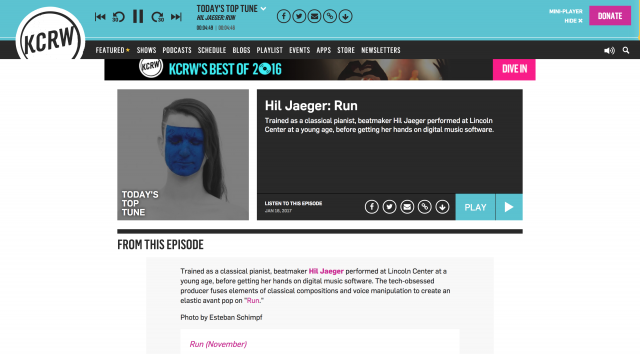 Jaeger, an Oakland-based designer and artist, spent years playing classical piano in New York City chamber groups before expanding her musical talents into the electronic music scene in Berlin. Her interest in electronica led her to the Music and Technology program in 2015. During her time at CalArts, she designed her own MIDI instruments and collaborated with performers and producers on campus and from the greater LA music community.

Jaeger’s song “Eating Its Way In” appeared on the soundtrack for the film Fort Tilden, which won the narrative feature grand jury prize at this year’s SXSW Film Festival.

She currently holds a residency every last Thursday of the month at Era Art Bar and Lounge in Oakland, Calif. and is gearing up to go on tour to promote her full-length album CMPRSSN.

According to Jaeger’s website, she creates, “electronic landscapes and populates them with dramatic-pop melodies and ethereal vocals in her multiple roles of electronic producer, vocalist, composer and engineer.”

More from the site:

Through a focus on emotive power-vocals with melodic pop-drive that chart a path through digital landscapes with layered surgical precision, Jaeger’s work interrogates and frays apart binaries between human and machine, natural and artificial, male and female, chaos and order, pleasure and pain, hook and abstraction, all the while utilizing the immediate grip of pop to push through an intensely intimate soundscape.

“Run (November)” is available to stream for the next three months on KCRW’s website, and Jaeger’s album CMPRSSN is available on Spotify, iTunes and Amazon. Listen to the song below.