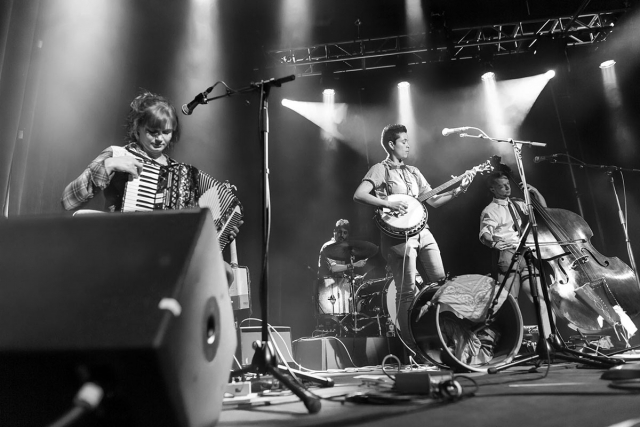 On Saturday (Feb. 11), indie folk rock band Abby and The Myth holds a release party at Los Angeles’ The Hotel Cafe for its latest album When You Dig A Well.

The band is fronted by composer and world percussionist Abby Posner (Music BFA 06), who composed and produced the 12 tracks on the new album. The Myth, a musical ensemble composed of musicians that Posner has collaborated with throughout Los Angeles, is comprised of Cara Batema on accordion and vocals, Donovan Bullen on bass and vocals, and David Celia on percussion.

With a lifetime of playing music, bolstered by studies in CalArts’ notable music program, and several successful years in LA’s music trenches, When You Dig a Well, brings a unique, infectiously catchy indie folk rock sound that’s garnering major attention. Fans compare Abby and The Myth to Mumford and Sons, The Lumineers, and Of Monsters and Men. Their inviting harmonies, feel-good rhythms and sing-along choruses make for a lively, kinetic show that invariably has audiences up on their feet and dancing.

Above: Abby and The Myth performs ‘The Path’ at The Hotel Cafe in October 2015. ‘The Path’ is the 12th track off its album ‘When You Dig A Well.’

Abby and The Myth